A glimpse into a Glasgow pub 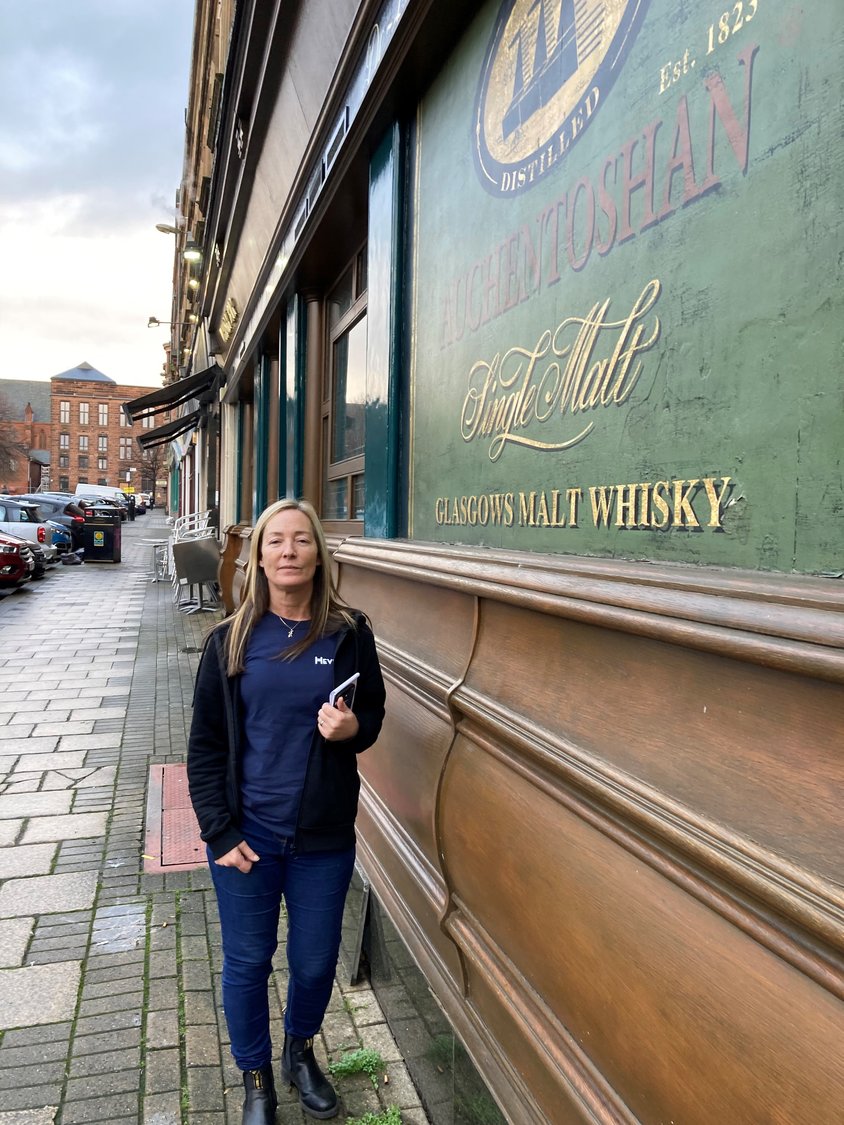 Publican Helen Fraser at the facade of the Lismore.
Photo by Vivian Savitt 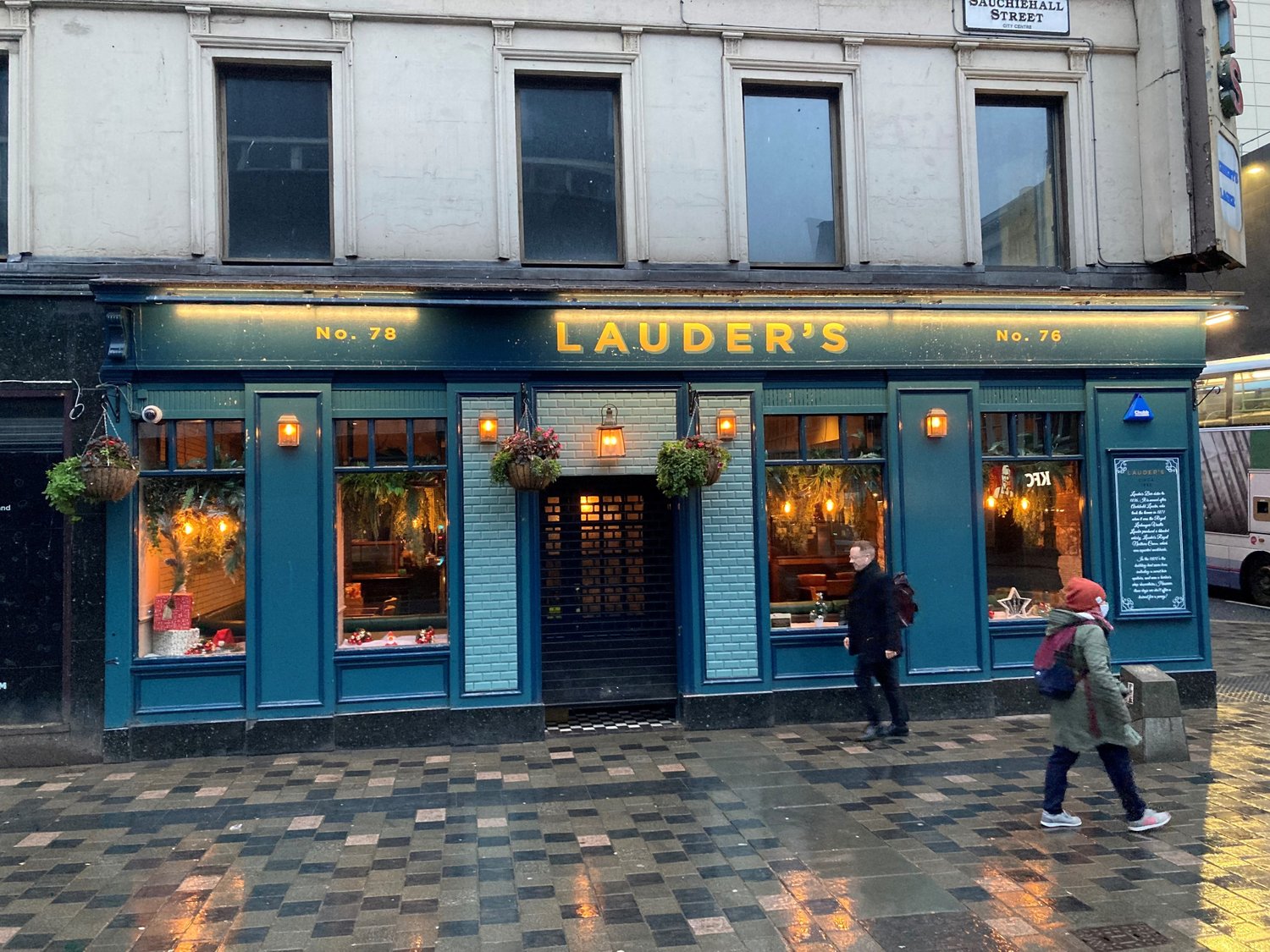 The Lauder,s pub, tidy and near symmetrical, resembles a set by filmmaker Wes Anderson.
Photo by Vivian Savitt 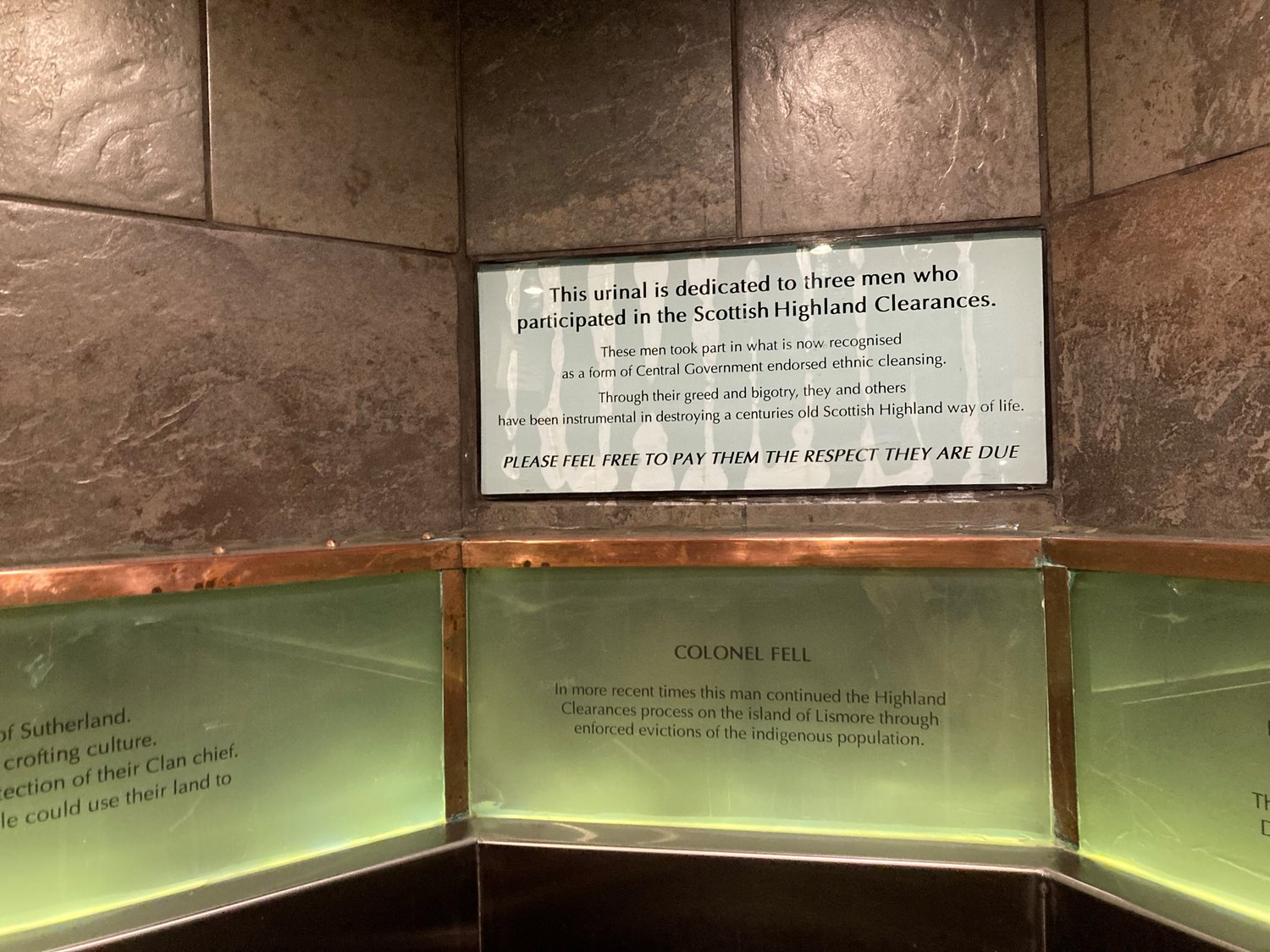 A “tribute” to the Highland Clearances inside the men’s urinal at the Lismore pub.
Photo by Vivian Savitt 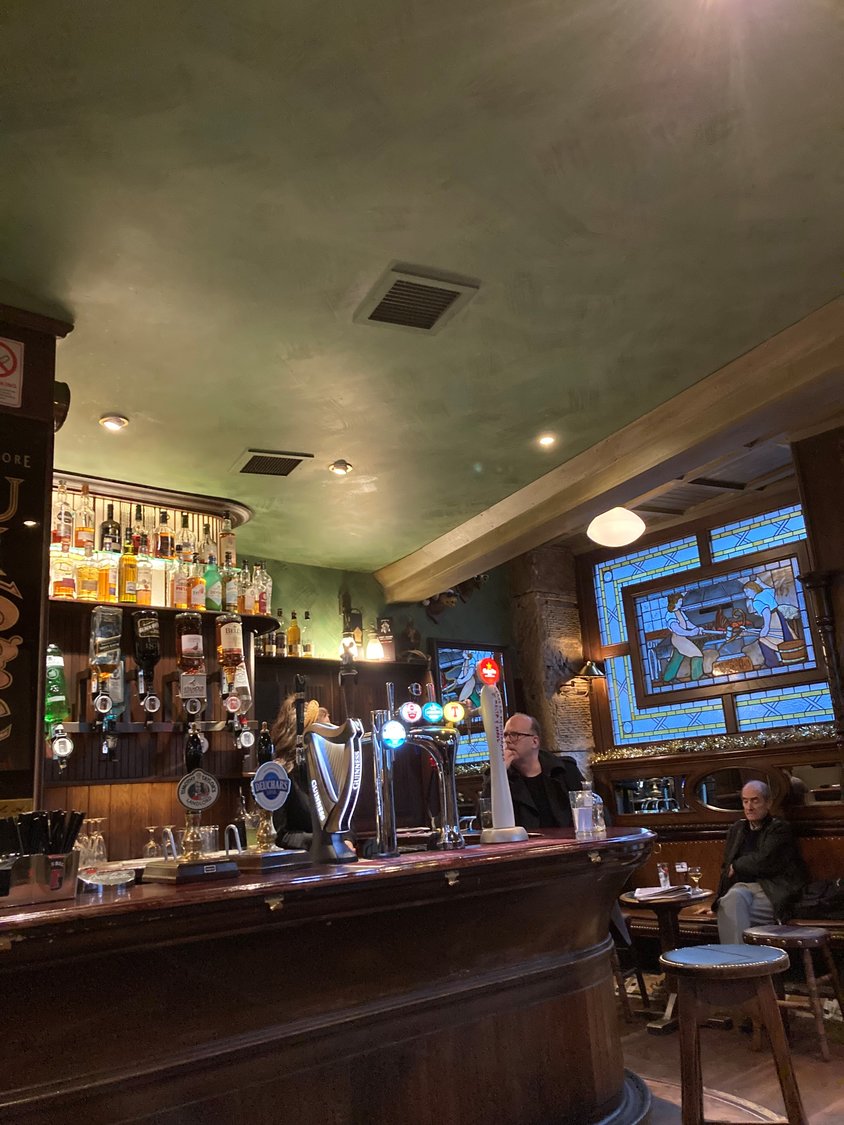 A corner of the Lismore pub.
Photo by Vivian Savitt
Previous Next
Posted Thursday, December 30, 2021 4:05 pm

During lockdown, when the pubs were closed for so long, people enjoyed themselves at home drinking cocktails in their pajamas. A lot of pubs died.”
Helen Fraser, the Lismore’s publican
By Vivian Savitt

For two pounds/75 pence you get a whiskey side with a half lager or dark beer at the Lismore Pub in Glasgow’s West End. For less than $3.50, this “old man’s drink,” is a bargain.

On the afternoon following Donald MacDonald’s funeral, it was imbibed in quantity while Gaelic tunes were sung throughout the pub.

My first interview with Helen Fraser, the Lismore’s publican, didn’t come off the day it was scheduled, but the reason for the postponement was unknown to me at the time.

“Donald had been a regular for years,” Helen told me the next day. “He was 70 years-old and died of a massive heart attack. We have a table called the ‘corner of the Donalds’ named after five of our customers, including him.”

Helen is a blonde, blue-eyed Glaswegian who looks too youthful to have put in 23 years at the Lismore. Her face appears unstrained and relaxed.

“I treat this place like my home,” she said. “We get to know our daytime customers who come in for companionship. If someone hasn’t showed up for a week, I call them at home. I know their phone numbers and where they live.”

Helen continues speaking as her eyes scan the Lismore’s clientele, “I take people as I find them. The ones who look like they’re going to be cheeky rarely get through the door. It helps avoid conflict to let a woman handle them. When called for, I can talk people down. The young men who work for me are mainly here to lift kegs and stay behind the bar. They know to let the female staff handle possible rows. “

Helen admits to possessing pub radar, so I was not surprised to learn she met her husband at the Lismore. The Lismore has a soothing, traditional pub atmosphere with time-honored embellishments like dark wood, frayed upholstery and stained-glass windows.

Depicted on the windows are scenes commemorating the Highland Clearances and the demise of the clans. With typical Scottish flair and wee humor, the commemoration extends into the men’s loo. Admittedly these are the kinds of pubs I am drawn to — visually cozy, a lit fireplace, no blaring sports, no cocktails and a diverse crowd age-wise.

Yet I am hardly an ideal pub customer. I’ve never been a beer drinker, can only manage a whiskey toddy if a cold’s coming on, and a gin/tonic is strictly my summer drink. Mulled wine, however, is appealing this time of year in Glasgow.

Seemingly reading my mind, Helen said, “we’re known as a talking man’s pub although women feel comfortable coming in alone because the staff is watchful. We don’t serve food or cocktails. Music is kept low. There are two bar areas — one at the entry which is more working-class and another at the back that attracts professionals.

“We never had karaoke, but there is live Scottish music Monday and Tuesday evenings, and ’wee jazz’ from 3 to 6 p.m. on Tuesday. This isn’t a sports bar, but sometimes the college crowd – we are close to the Uni – like to watch Scotland games and tennis matches so at night we turn on the television for them.”

The contrast between the Lismore pub and Lauder’s downtown in Glasgow’s City Centre is marked. With its dark blue facade, Lauder’s looks a traditional pub, although it is edged by mediocre-to-dreadful modern buildings of steel and plate glass windows. Inside, however, the sounds of televised sports and pin-ball games are immediate – as is the smell of pub food. There is a lot more jostling about, but everyone seems to be enjoying themselves.

Unlike the Lismore with its sole proprietor and no ambition to change things, Lauder’s is owned by a corporation with many pub holdings. Nonetheless, the assistant manager I spoke to there is as warm and engaging as Helen, and also loves working in a pub.

Both say that “every day is different.”

With the prospect of an Omicron scourge, publicans are worried once again.

“During lockdown, when the pubs were closed for so long,” Helen said, “people enjoyed themselves at home drinking cocktails in their pajamas. A lot of pubs died.”

She hopes that if new Covid restrictions are imposed, they won’t amount to more than the pubs having to close earlier. Septuagenarians like myself seek to hold on to the past and those fine, homey pubs like the Lismore. Although I am not feeling wobbly, I observe that the pub regulars with their “half and a half” are dying out.

As Helen put it – how this might affect the future of pubs will be “a whole new ball game.”

Two tips in regard to PUBs:

It is standard practice to say “take one for yourself” to indicate that the server gets a one-pound tip.

A steward or bouncer standing outside a pub at night signals that the place is rowdy and requires security.