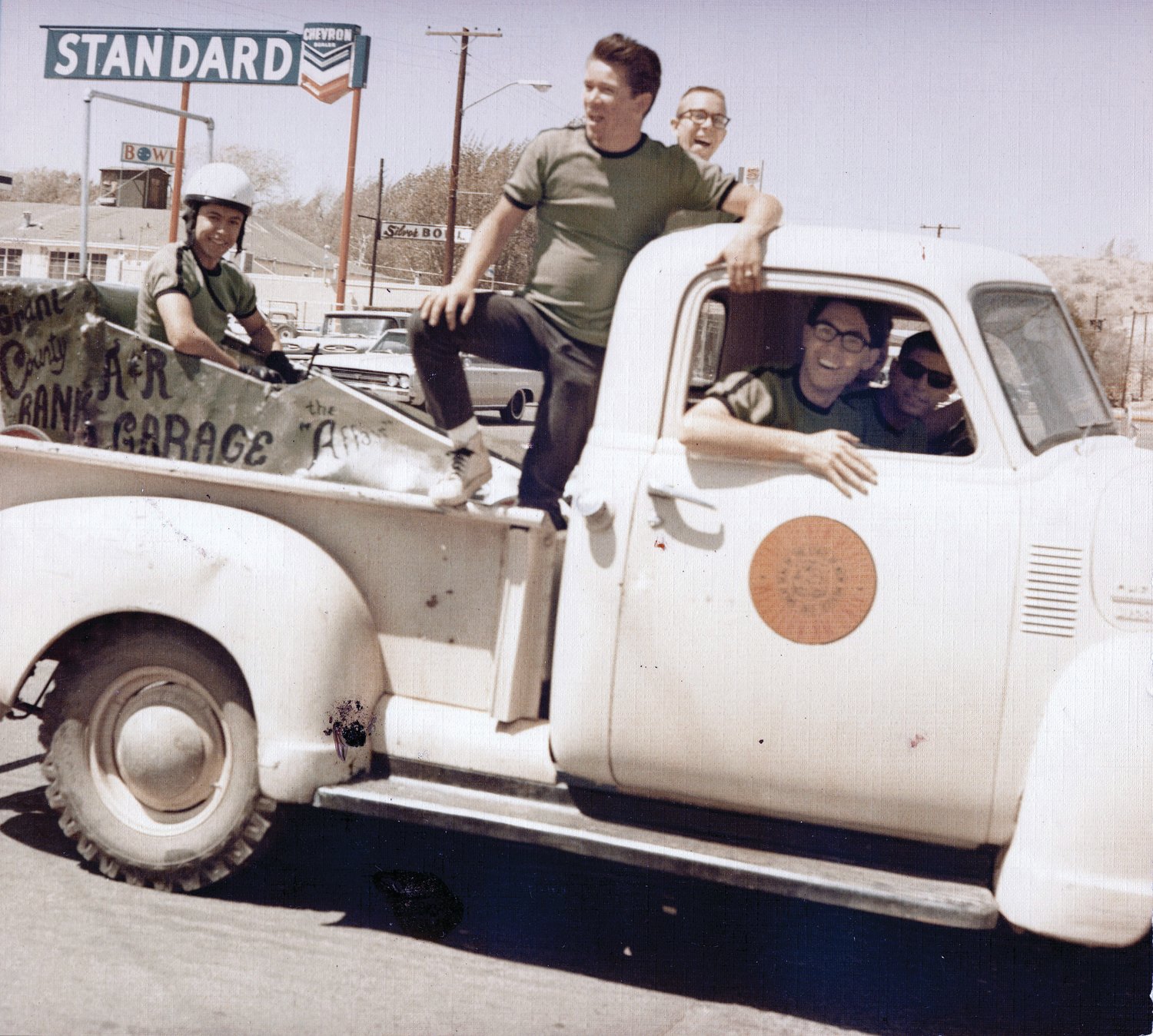 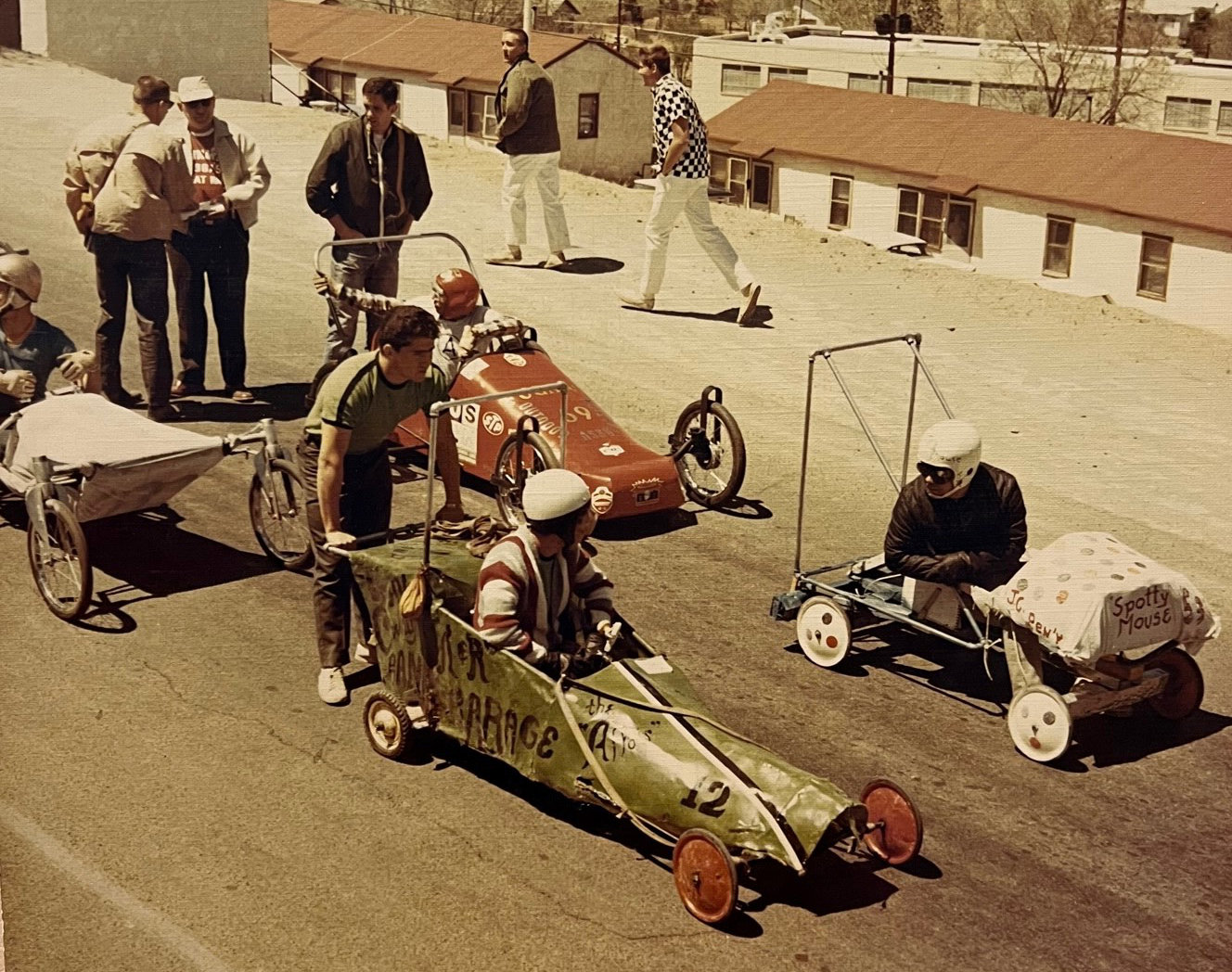 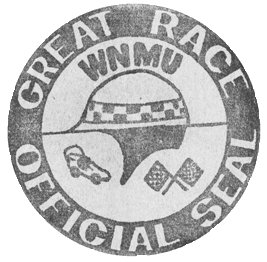 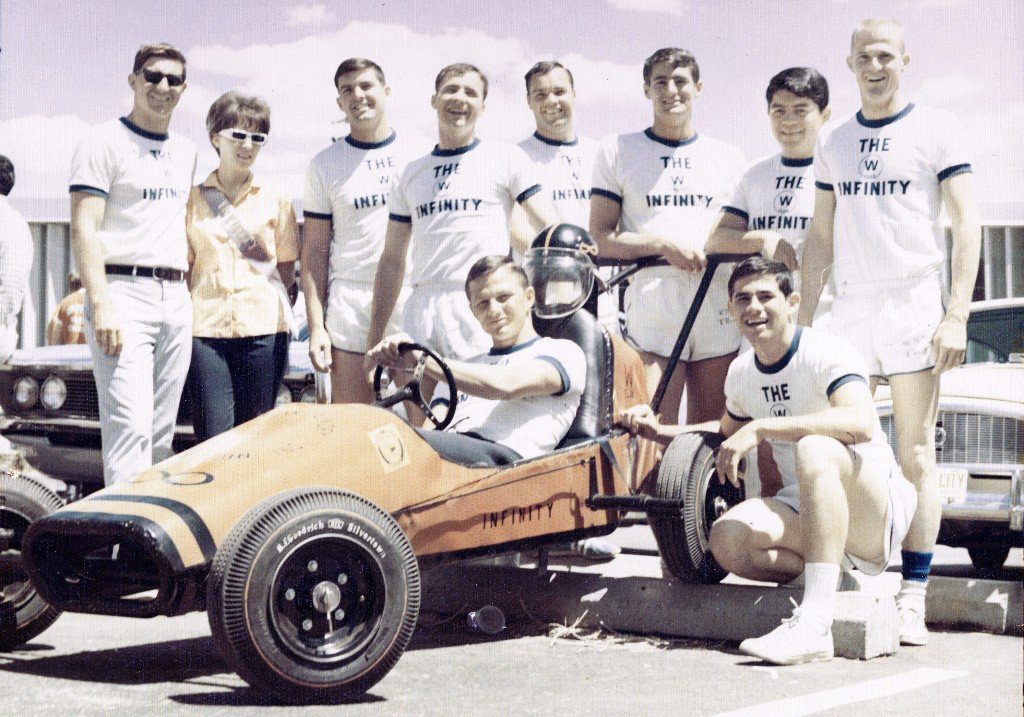 I was Head Resident of the Eckles Hall housing staff in 1967 when Mohamed Alli was at the top of his game. For fun, we staged a mock boxing match between Dave Baer and Bob Hack. (There was no physical punching just pantomiming.) Involving many of the Eckles Hall residents, we made a boxing ring with ropes and assembled cardboard boxes to look like a large TV camera. A dozen people dressed up as the press, and we issued press passes. They brought cameras with flash bulbs to create the effect. Everyone played their part, which made it fun. So many turned out, that we didn’t have enough room. Watching through the windows was the best seat in the house.

Everyone talked about the mock match for weeks. So, I decided to organize something that would include the students, faculty and residents of Silver City, something that we all could play.

As a young boy, I had participated in the Soap Box Derby. We had drivers, judges and sponsors. Why not try a race where we got students to build race cars, Silver City businessowners to sponsor the cars, and WNMU faculty to be the judges.

Prior to a Housing Department staff meeting with WNMU Housing Director and Mustang Basketball Coach Jim Smith, I met with him by myself, sharing my Soap Box Derby idea. Jim suggested rather than just a downhill race, it be a race all over the campus, where we had the drivers coast down the hills and get pushed up hills by teammates. We both started adding ideas as our excitement grew out of control. We’d begun laughing when Jim said, “Wait! We can call it The Great Race!” Both our eyes opened wide; we knew we were on to something.

Just then, the other Head Residents came into the room, and Jim and I relayed our idea. I think that was the longest, most exciting meeting we ever had. The ideas just kept coming.

Dick Wert was from Indianapolis, Indiana, and a regular at the Indianapolis 500. He said, “At the end of the Indianapolis 500, the winner drinks milk from a glass bottle and also kisses the Queen of the Race.” So, if we adopted that tradition, that meant we needed a queen, which meant we need to hold a pageant and choose a queen. Of course, having a queen would necessitate a parade down the main street of town. Then, we would need to build floats and recruit the college and local high school bands to participate. Plus, we’d want to showcase all the cars in the race at the parade.

I am writing all this so you can understand how fast we were thinking.

We had to get campus clubs to want to build cars. We also needed local businesses to sponsor Great Race events and of course sponsor the construction of cars in exchange for their names on the sides. We had to have the cars inspected by local city engineers to make certain they could be driven. (This was mostly to encourage more Silver City residents’ participation in the race.) Once the cars were inspected, we had to have the cars impounded until the morning of the race to prevent others from tampering with them. Silver City Police officers and Campus Police stood guard overnight.

You get the idea of how we created Great Race and ensured lots of participants.

We wanted people in Grant County to attend the race, so we had fliers printed with a coupon for free Coca-Cola. We didn’t pass them out by hand; we had them dropped from an airplane over the most populated areas.

We were interviewed on the local radio and featured in newspaper articles, even in El Paso.

We ran Betting Odds sheets, even though we had no idea people were gambling on the race.

In a race, you must have pit stops, of course. We decided that at one stop, the crew must change the tires, swapping them front to back and back to front with three professors observing. At the next pit stop, the drivers had to get out of their car and do 10 pushups. (Three additional faculty judged that.)

You get the idea?

Since this was to be an important event, we had to invite the Governor of New Mexico. And he came. (Thank goodness his son was a student at WNMU.)

To determine what position the cars should be in at the start of the race, we had to have a time trial. That also meant recruiting timers, flag wavers, etc. from Silver City. We couldn’t leave anyone out!

The night before the race, we had a dinner in The Cooler, our student union building at the time. All the sponsors and team members (each car had 10) were present. It was the first time they all saw the racecourse. Up until that time, only the commission knew the course. There were unexpected obstacles, like a steep hill leading to a mud hole.

By the way, there was an “Official Stamp” that marked all the paperwork to make certain it was “official,” even though it actually meant nothing.

Early the next morning, all the teams walked the racecourse for the first time and decided where and how many pushers they wanted to place at different spots along the course. This meant during the race, some of the pushers, even if exhausted, had to move to their next positions to push.

Just before the start, I went on the roof of The Cooler and looked down. I couldn’t believe the view: more people than I’d ever seen on campus. All the commissioners were dressed in their “official” shirts, as were judges and sponsors. The Dean of Student Affairs was the “official” starter who waived the “official” starting flag. All the cars were lined up two-by-two in their positions. The band played the National Anthem, and I think we even had an invocation.

The cars started coasting down the hill, but one was too far ahead, so we had to have a restart. That added to the excitement. People of all ages were running all over the racecourse like mad.

At the end of the race, the person who waived the victory flag was none other than the University President. This was really something, as he never was out in the public eye. When the winner crossed the finish line, his goggles were immediately smeared with grease so he’d look just like the Indianapolis 500 winner. The car was held up by the teammates with the driver still inside. Finally, the driver drank the milk and kissed the queen.

Even weeks after The Great Race, our excitement didn’t die off.

As per Jim Smith’s suggestion, we had a World Premier of The Great Race using footage from the inaugural event. The auditorium was new at that time. We had everyone dress formal, renting every tuxedo in the entire county, Deming and Lordsburg. Champagne glasses were filled (with apple juice) for toasts, and the show began in a packed auditorium.

That was all in 1967. The Great Race has continued at WNMU for 51 continuous years, propelled by the enthusiasm of students at Western New Mexico University.

When I return for the Great Race, I like to just stand in the background and watch everyone, because that is what it is all about: a great time for all.

In a 55-year tradition where students, faculty, staff and alumni push carts resembling race cars around the Western New Mexico University campus, the operative word has been “fun.”

For 2022, WNMU has expanded the yearly event to invite the community and the rest of New Mexico to celebrate not only the historic race but the freedom to get out and enjoy after two years of being cooped up and restricted.

Fifty-five years ago, Great Race was founded by Western New Mexico University students who sought creative ways of involving the entire region in a festival they conceptualized and organized purely for entertainment.

“To mark the return of the tradition generations of Mustangs have carried on, we are inviting those from near and far to come celebrate the ingenuity and drive of our student body at GR 55 Live,” said WNMU President Dr. Joseph Shepard. “The festival is our way of allowing everyone — whether 1967 alumni or incoming WNMU freshmen -- to revel in campus culture and dance to music by this generation’s rising stars and by an iconic rock band that many associate with fond memories and good times,”

The weekend of April 22 and 23 caps off the Great Race, said Alexandra Tager, director of WNMU Cultural Affairs.

“It’s been a fun event everyone looks forward to,” she said. “They push human-powered carts on a course that goes around campus and there is a mud pit that they have to navigate through.”

Tabor said in addition to the race, they decided to make it a larger event so there is a two-night concert that is happening as well.

“On Friday and Saturday nights we have concerts,” she said. “The first night is a young star named Alec Benjamin and then the next night Los Lobos.”

Individual tickets and weekend passes for the main concerts ($25 per adult and $40 per adult, respectively) will be available at wnmu.edu/culture. Those 17 and under will be admitted free both nights. WNMU students, faculty and staff will be admitted free with Mustang ID. Everything else is free including a carnival and games including a washer tournament and a car show. Local live music will also continue through Saturday.

Friday night’s concert and accompanying carnival games are geared toward a pre-college and college crowd, while Saturday night’s show is aimed at a broader American southwest audience. On both nights, food trucks will serve up dinner and refreshments.

“Our goal is to have people come and see what a great, fun, lively campus we have,” Tager said.

Kacie L. Peterson, director of Foundation and Alumni Development within the Western New Mexico University Foundation and a race organizer, remembers the Great Race from her time in high school in Silver City.

“I remember pushing (one of the carts),” she said. “My uncle, who was a science teacher, got us all together and we came up and pushed. I remember it being a lot of fun. Hopefully some of that enthusiasm will come back.”

Peterson has gone in-depth into some of the original race facts.

“It started because the kids wanted something to do,” she said. “In southern New Mexico, you kind of have to create your own fun if you want to have fun. So, it spurred a lot of it was showboating.”

The race began with a group of students who loved to put on productions, like a boxing match, always a big to-do.

“The great race started the same way in 1967,” she said. “It was just this idea that snowballed into this extravagant event. It was all student based, they did all the work and the faculty served the student needs.”

The students don’t build their own cars like they did historically; the school has several carts that the teams use.

“So, it’s kind of flip-flopped a little bit but the energy and excitement is stirring back up to what it used to be in 1967,” Peterson said. “It’s the longest running tradition on campus. It used to be a big deal. It would be really cool to have that kind of excitement again.”