A single snake split by a god 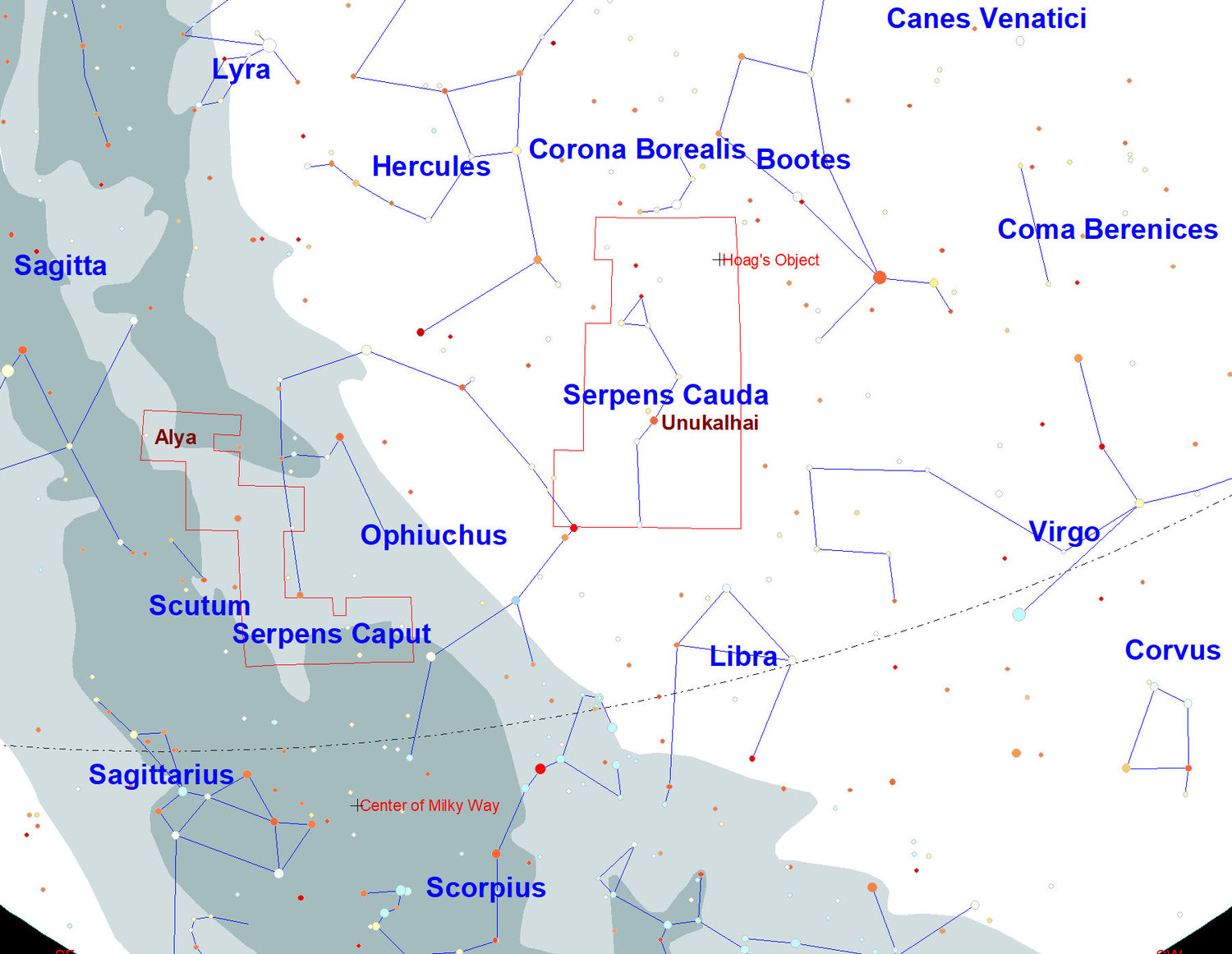 Serpens, the Serpent, is associated with the constellation Ophiuchus. The serpent goes from east to west of Ophiuchus, with the body hidden behind Ophiuchus. The two parts are called Serpens Caput, the Head of the Serpent, to the east of Ophiuchus and Serpens Cauda, the Tail of the Snake to the west. One of the best deep sky objects in Serpens is the great globular cluster M5. Hoag's Object is a ring galaxy with the ring completely separated from the body of the galaxy.
Posted Thursday, July 1, 2021 11:13 am
Calendar of Events – July 2021 (MDT)

We in the desert southwest are used to snakes, but our July sky has an actual serpent. Serpens, The Serpent is divided into two unconnected parts, separated by the constellation Ophiuchus. Serpens Cauda, the Serpent’s Tail is high in our southern sky, while the Serpens Caput, the Serpent’s Head, is a third of the way up in our southeastern sky.

The Greek mythology, Asclepius was the son of the god Apollo and a mortal woman, who died around the time Asclepius was born. Apollo raised his son, teaching him about medicine. Asclepius became a famous healer but was imprisoned in a secret prison and ordered to bring the sea-god-to-be Glaucus back to life. While contemplating a way to save Glaucus, he absent-mindedly pounded his staff on the ground.

A snake unseen by Asclepius crept up toward the moving staff and was struck by it, killing the snake. Later, another snake brought an herb and put it on the dead snake’s head. Asclepius saw the second snake’s actions and was surprised to see the dead snake revive. He gathered some of the herb and used it to bring Glaucus back to life. By eating the herb, Glaucus became immortal.

Asclepius is represented in the sky by Ophiuchus, with the snake passing behind him or between his legs. When the Belgian astronomer Eugène Delporte drew the constellation boundaries, he faced the problem of disentangling the two constellations. He decided that Ophiuchus would be a single constellation, with Serpens split in two parts, the head and the tail, with the rest of the body hidden behind Ophiuchus. The two ends of the snake became Serpens Caput and Serpens Cauda.

The brightest star in Serpens is Alpha Serpentis, which is formally named Unukalhai or “the serpent’s neck.” It is near the center of Serpens Caput, a spectral class K2 orange star shining at magnitude +2.6. This giant star some 12 times the diameter of the Sun is located 74 light-years away from us. Unukalhai is reaching the end of its life, having already run out of hydrogen to fuse in its core like younger stars are still able to do. Unukalhai now fuses hydrogen in a shell around the inert core.

In northwestern Serpens Cauda is a circular object invisible to the naked eye at magnitude +16.2. The object showed up in the Palomar Sky Survey, a comprehensive series of images taken at Mount Palomar with the 48-inch telescope covering most of the northern sky. The object was not really investigated until American astronomer Arthur Hoag looked at it more carefully.

Later dubbed Hoag’s Object, it appeared as a central sphere surrounded by a ring. The object is just 45-seconds-of-arc across. Hoag at first thought that it might be a planetary nebula. An aging star expels its outer atmosphere as it goes through the final stages of its life. This can create a small nebula that comes in many shapes, including rings. One popular example is the Ring Nebula (M57) in the constellation Lyra.

There was not enough detail to be sure it was a planetary nebula, but there was no star visible at the center of the object. Hoag also suggested that it might be an Einstein Ring. One of the predictions of Albert Einstein’s Theory of Relativity is that a mass bends light. If a spherical galaxy had a quasar exactly behind it from our point of view, the galaxy’s gravity would bend the light from the much more distant quasar, providing a ring of quasar light abound the galaxy. This theory was later rejected when it was discovered that both the ring and sphere were the same distance away from us, around 600 million light-years.

Hoag’s Object became better understood when the Hubble Space Telescope imaged it in great detail. The ring had blue clumps in it marking young star clusters. In fact, the entire ring has a bluish tint from many hot, young, blue stars. The central sphere has a much yellower tint, from smaller, older stars. This makes quite a contrast with the yellow sphere of stars surrounded by a ring of blue stars, dust and gas. Between the two there is almost nothing, allowing more distant galaxies to be seen through the gap, including another ring galaxy.

How Hoag’s Object formed is a mystery. Ring galaxies often form after a collision with another galaxy, but there is no other galaxy nearby and there is no evidence of a collision. Perhaps it was a barred-spiral galaxy with arms that were moving so fast that they completely detached from the galaxy. How Hoag’s Object formed and how long it will last are one of the mysteries of the cosmos.

As the Sun’s glow fades from the evening sky, only two planets are visible, Venus and Mars. Magnitude -3.9 Venus is moving upward this month while magnitude +1.8 Mars is moving more slower downward. The two will be closest for us on the evening of July 12, when they will be less than a degree apart and getting closer. Venus will be 11.6 seconds-of-arc across and 87 percent illuminated, while Mars will be 3.8 seconds-of-arc across. The two will start out 13 degrees above the western horizon and they will set just before 10 p.m. Venus travels from central Cancer to east-central Leo while Mars moves from eastern Cancer to west-central Leo during the month

The Ringed Planet rises around 9 p.m. in the east-southeast and it is visible for the rest of the night, reaching 13 degrees above the southwestern horizon as it gets light. At midmonth, its disc is 18.4 seconds-of-arc across. The Rings are 41.8 seconds-of-arc across, tilted downward 17.7 degrees with the northern face showing. The magnitude +0.3 Saturn is moving slowly westward in central Capricornus.

Jupiter rises a little after 10 p.m., arcing across the sky to 30 degrees above the south-southwestern horizon as dawn breaks. It shines at magnitude -2.8 with a disc that is 47.0 seconds-of-arc across. The King of the Gods is moving slowly westward in western Aquarius.

Mercury is still in the morning sky for the first two-thirds of the month. It reaches its greatest distance from the Sun on July 4, when it turns back toward the Sun. Mercury’s disc will be 36 percent illuminated crescent and 8.0 seconds-of-arc across on that day as it shines at magnitude +0.5. It rises around 4:45 a.m. and it is almost nine degrees above the east-northeastern horizon as it gets light. During the month, the Messenger of the Gods moves from central Taurus, across the very northern tip of Orion, across all of Gemini into central Cancer. While watching Mercury in the morning, don’t forget about Venus zipping past Mars in the evening and "keep watching the sky"!