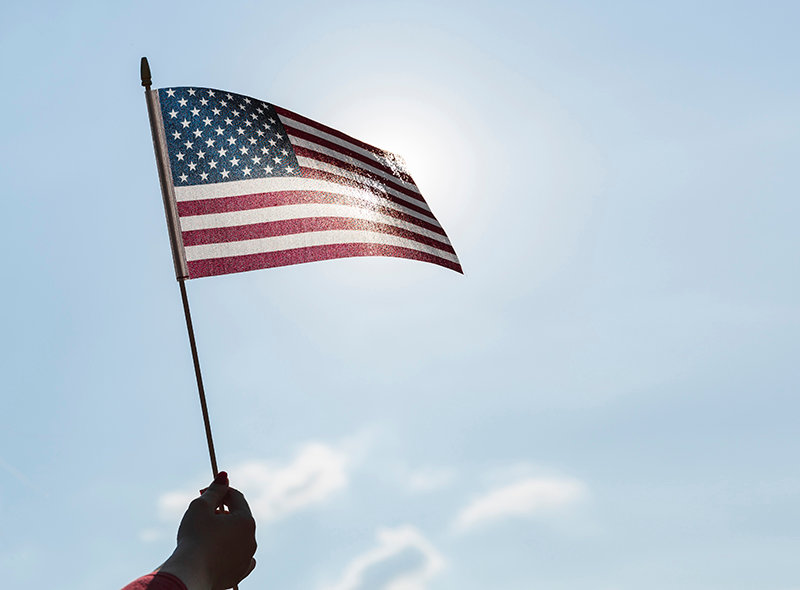 America is not perfect, far from it. Like anything involving humans, our nation has many flaws. Those humans have done many horrible things through the years.

Our many struggles and difficulties in America, though, have always been accompanied by hope, creativity, opportunity and original thinkers.

I love road trips. In travels through 40 of our 50 great states, I’ve encountered many people and adventures. What were the most American experiences I’ve had in each of those states?

It’s tempting to list just food, national parks or sporting events. Those are very American, for sure, but I wanted to express more variety and not just all happy things.

So, here are some of the very American experiences I’ve had in 50 years of road trips.

Alabama – Montgomery, 2021: Walking from the Dexter Avenue Baptist Church, Rev. Martin Luther King Jr.’s first pastoral home church, about 300 yards to the front doors of the state capitol.
Alaska – Healy, 2021: sitting in the back of a truck, in a light rain, eating Pad Thai from one of the myriad Thai food trucks that - for reasons I never fully learned - dot our 49th state.
Arizona – Tucson, 1991: At the McKale Center at the University of Arizona, the day before NCAA sub-regional basketball games. Crews were covering, with black cloth, the RC Cola logos in the arena, because Coca-Cola was the official NCAA soda sponsor, and had the vending rights for the tournament.
Arkansas – Fort Smith, 1990: Right after the University of Arkansas clinched a spot in the NCAA Final Four, I was in a barber shop. Patrons were criticizing and making racist comments about Razorback head coach Nolan Richardson, an African-American. I walked out.
California – Riverside, 1990: After having my first In-N-Out burger (double-double, animal style), watching the movie “Fantasia” at a special re-release for its 50th anniversary in a beautiful theater with a giant old-Hollywood-style silver screen.
Colorado – Eight Mile Creek, 2009: Spending the day fly fishing with my lifelong friend David Allen.
Connecticut – Hartford, 1990: Touring Mark Twain’s House and Museum, as wonderfully eclectic and fascinating as the man himself.

Delaware – Wilmington, 1990: Trying to take an old-school selfie in front of an “America’s First State” roadside sign and watching my Yashica fall off the top of my car as the self-timer expired.

District of Columbia – 1993: Weeping at the Vietnam Veterans Memorial on the National Mall.
Florida – Fort Lauderdale, 1989: body surfing in the Atlantic Ocean.
Georgia – Atlanta, 2005: Eating oysters at Spondivits.
Hawaii – Kona, 1993: Surfing on an authentic Hawaiian outrigger canoe with native islanders.
Idaho – Pocatello, 1976: Rafting down the Snake River.
Illinois – Chicago, 1984, 1986, 1989, 1990, 1993: Watching the Cubs in Wrigley Field, singing “Take Me Out to the Ballgame” with Harry Caray during the seventh-inning stretch.
Indiana – Gary, 1990: Driving through the hometown of the Jackson Five.
Iowa - TBD
Kansas – Garnett, July 1972: Excitedly throwing a Black Cat firecracker high into the air, only to see it land in another kid’s box of 1,000 Black Cats, and hightailing it out of there as they all started to snap, crackle and pop.
Kentucky - Bowling Green, 2002: Seeing the General Motors assembly plant where Corvettes are made.
Louisiana - Baton Rouge, 1991: Following a July wedding in an un-air-conditioned church with a reception in a well-air-conditioned parish hall, catered with Popeyes chicken. (This also completed my quest of visiting every city in the 1983 Huey Lewis & the News song, “Heart of Rock & Roll.”)
Maine - TBD
Maryland – Bethesda, 2005: Eating Japanese food in a sushi bar with 10 TVs, all showing clips of 20-year-old sumo wrestling matches on endless loop.
Massachusetts – Boston, 1988: Visiting Bunker Hill (which is actually Breed’s Hill), and learning Americans won a key Revolutionary War battle because the British brought cannonballs too big to fit in their cannons, rendering them useless.
Michigan – Jackson, 1990: Spending a nice summer night tent-camping in a park, only to wake in the morning to find it was not a park, but the front lawn of a state penitentiary.
Minnesota - TBD
Mississippi – Biloxi, 1988: Changing the oil of my 1978 Buick LeSabre in the parking lot of the Sea Gull Motel before taking a dip in the Gulf of Mexico across the street.
Missouri – Kansas City, 1993: Listening to live blues and watching lindy-hop dancers at the historic Grand Emporium.
Montana - TBD
Nebraska - TBD
Nevada – Lake Tahoe, 1987: Watching Johnny Cash in a private concert for 150 people.
New Hampshire - TBD
New Jersey – Newark, 1988: Eating big New York-style foldover pizza slices for the first time.
New Mexico – Alamogordo and Las Cruces: Voting in every election I’ve been eligible to since 1996.
New York – Cooperstown, 1990: Camping near the Baseball Hall of Fame, visiting the museum by day and reading Walt Whitman in the rain-soaked tent by night.
North Carolina – Charlotte, 2015: Eating the best pork chops in the world, the grilled ones at LaWan’s Soul Food Restaurant.
North Dakota – TBD

Ohio – Conneaut, 1990: Turkey sandwiches and root beer floats at the iconic White Turkey Drive-In (est. 1952).
Oklahoma – This is difficult. I grew up here, from kindergarten through college. I could list a thousand things, but will limit it to two. Clinton, summer 1985: Covering and writing about American Legion baseball as a rookie reporter. Grand Lake, 1983: Noodling for catfish. (This is going underwater, sticking your arms into random holes, hoping to grab a big one by hand. I had a 25-pounder, but couldn’t hold on.)
Oregon - TBD
Pennsylvania – Philadelphia, 1990: Asking someone in a train station how you get to Veterans Stadium, and hearing the response, “Practice, young man. Practice.”
Rhode Island – Highways 45 & 102, 1990: Seeing how fast I could drive across our smallest state. (It was quicker than driving from Las Cruces to Deming.)
South Carolina – Columbia, 2015: Late-night shopping at Kmart to find two days’ worth of clothes to replace those in luggage misplaced by American Airlines.
South Dakota - TBD
Tennessee – (tie) Memphis, 1987: Chilling with the ghost of Elvis in the Jungle Room at Graceland. Memphis, 1993: Attending Sunday services at the Full Gospel Tabernacle, Rev. Al Green, pastor and lead singer.
Texas – Dallas, 1983: Going to the Texas State Fair, with all the spectacle of Big Tex, crazy fried foods and the annual Red River Rivalry football game at the Cotton Bowl. Sweeter than the cotton candy? The Texas Longhorns defeating the evil Oklahoma Sooners.
Utah – Montezuma Creek, 2001: Driving from Four Corners to Hovenweep National Monument only to find myself on the backside of the monument, unable to enter.