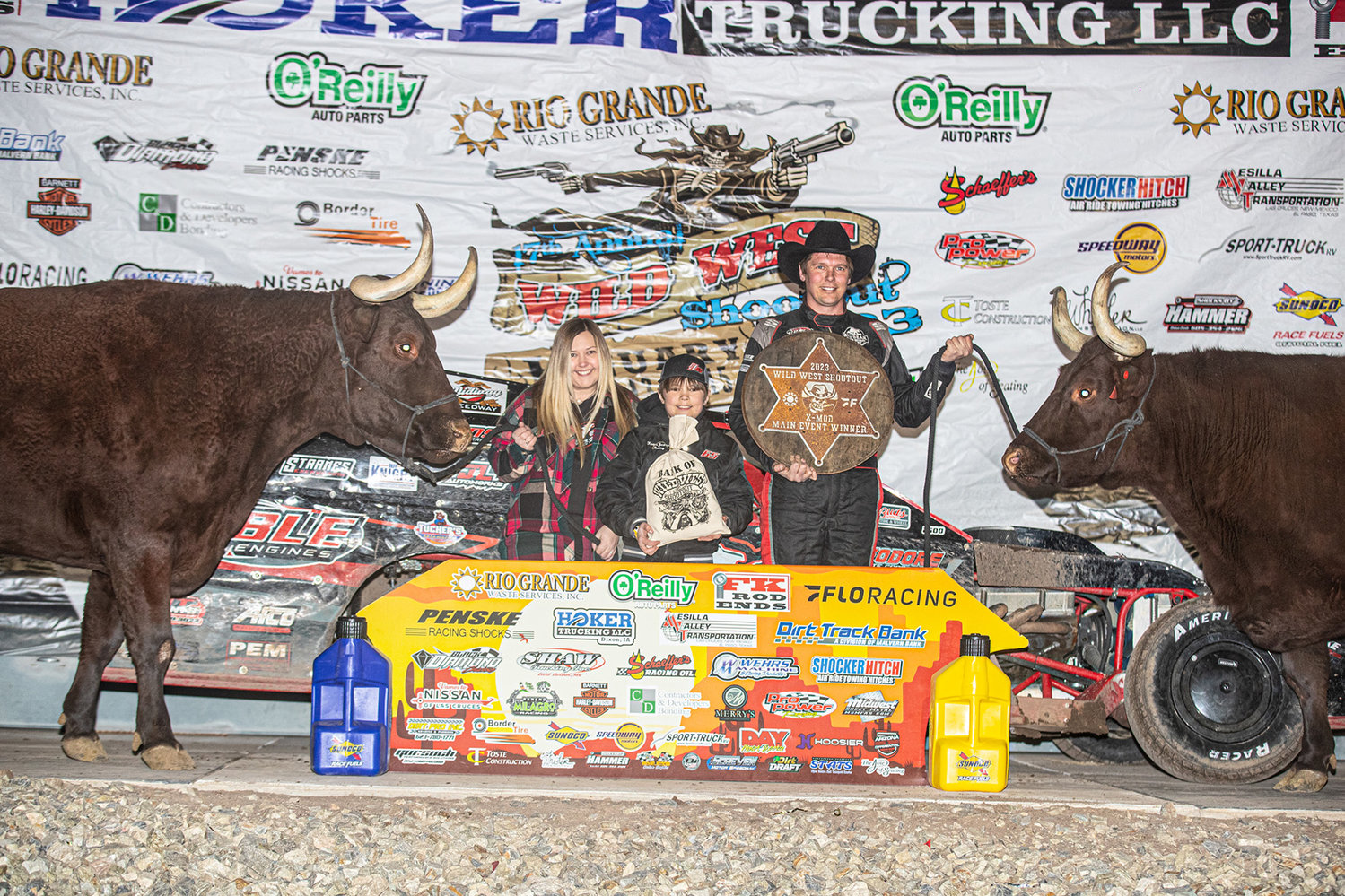 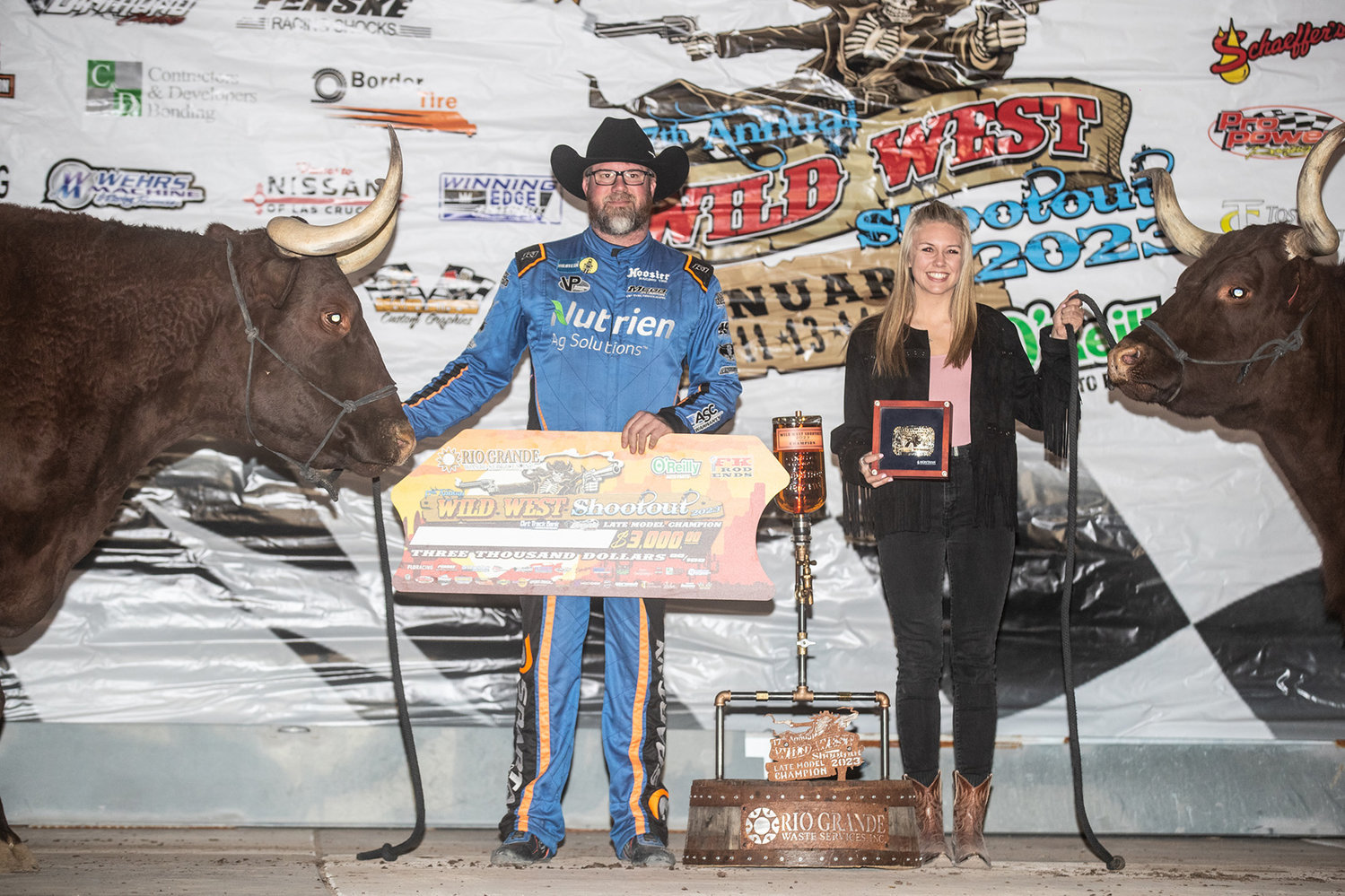 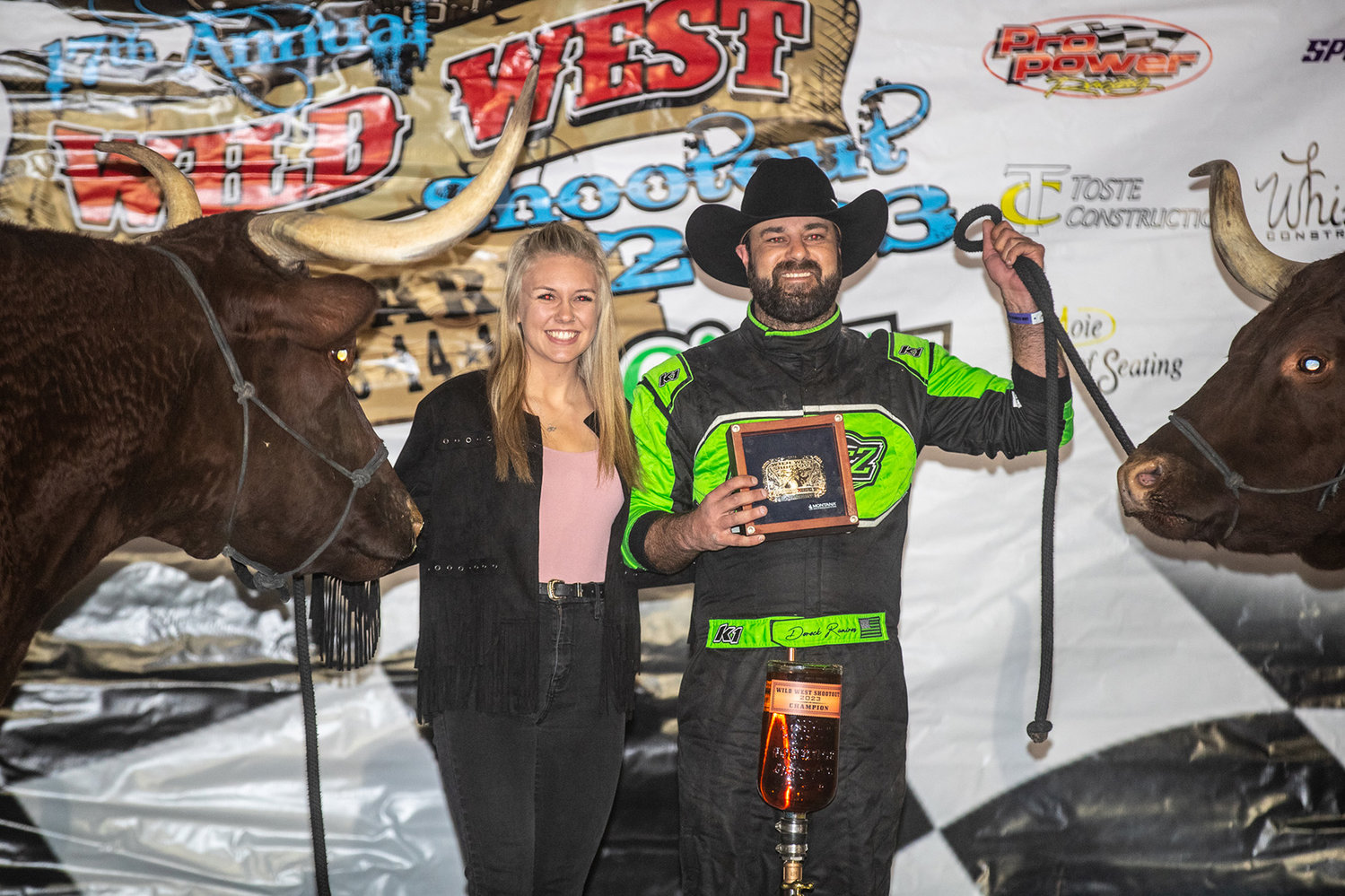 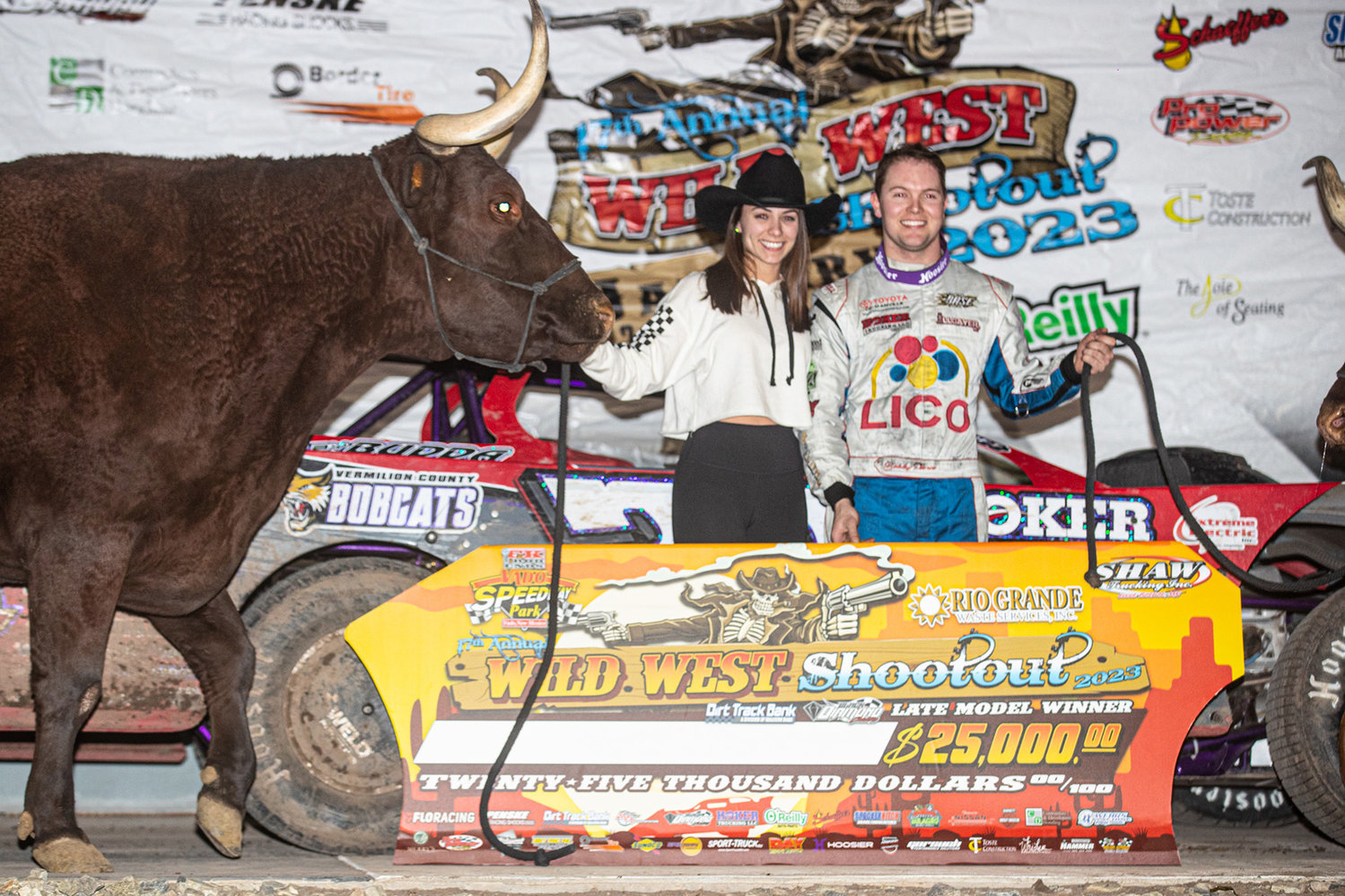 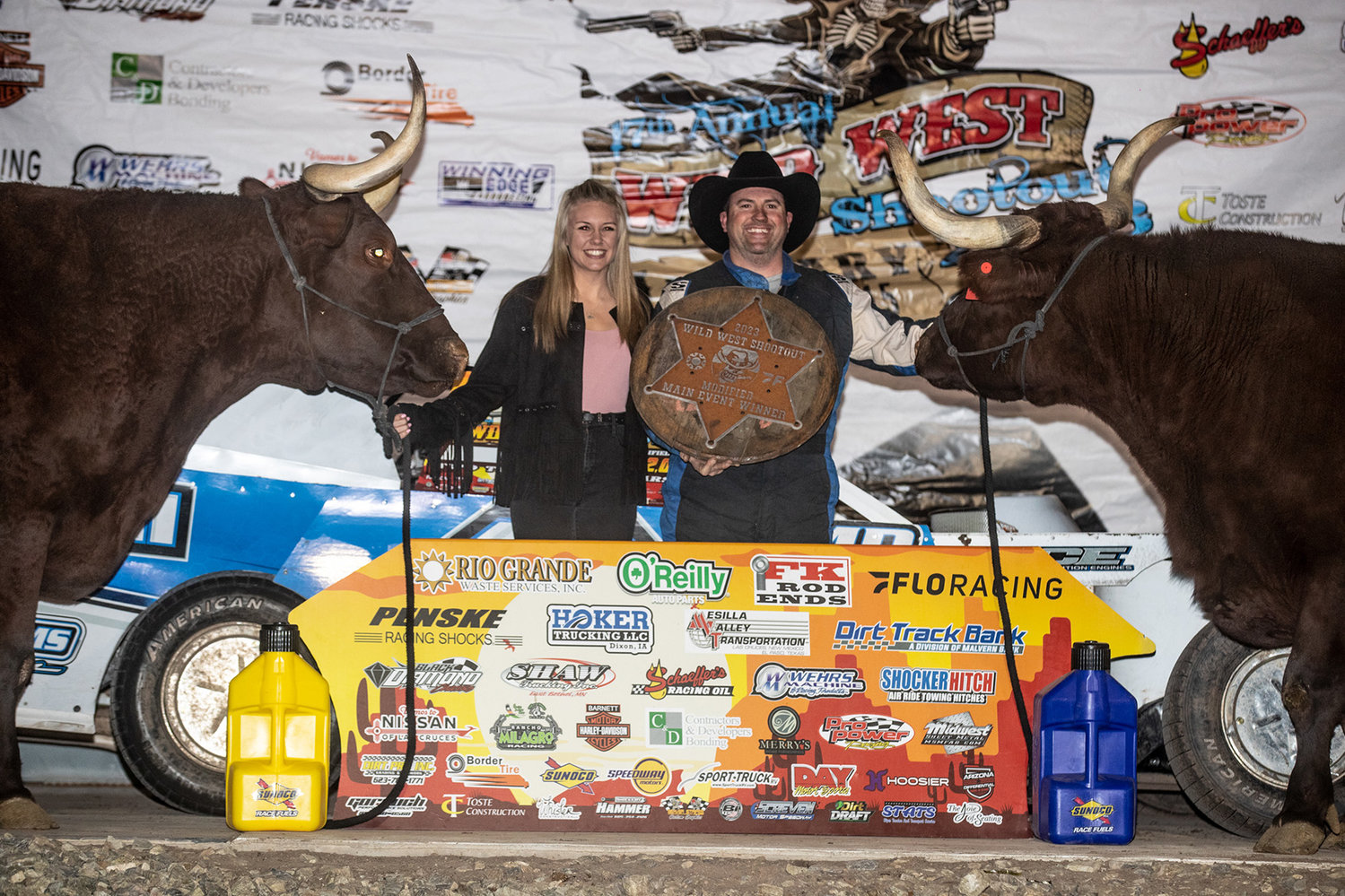 Emerging triumphant in a frenetic race that saw him outduel NASCAR Cup Series star Kyle Larson in the closing circuits and then celebrate by bellowing “Let’s go!” twice certainly took a lot out of the 26-year-old standout from Oakwood, Ill.

“After the sliders and screaming,” Pierce told FloRacing pit reporter Trenton Berry, “I’m out of breath.”

Indeed, Pierce earned the $25,000 first-place check he received for his second win in the last three events of the six-race miniseries. He lost the lead three times but kept fighting back, finally regaining command from Mike Marlar of Winfield, Tenn., on lap 43 and then turning back furious challenges from Elk Grove, Calif.’s Larson to secure the checkered flag.

Pierce crossed the finish line 1.159 seconds ahead of Larson in a wildly competitive feature that included six lead changes among four drivers. Marlar, who led laps 34-42, settled for a third-place finish with Stormy Scott of Las Cruces, N.M., tallying a miniseries-best placing of fourth and Garrett Alberson, also from nearby Las Cruces, completing the top five.

Jonathan Davenport of Blairsville, Ga., who led laps 2 and 4-17, fell short of claiming a $25,000 bonus for winning WWS features, finishing sixth after a lap-25 slap of the outside wall between turns one and two cost him several positions that he never recovered. But he was crowned the WWS points champion, duplicating a crown he previously wore in 2016 (at USA Raceway in Tucson, Ariz.) and ’21 (at Arizona Speedway outside Phoenix).

The exciting trajectory of the race was essentially set in its initial moments when front-row starters Pierce and Davenport swapped the lead each of the first four laps — Pierce leading the first and third circuits, Davenport surging ahead on the second and fourth tours.

The action at the front of the pack never cooled off. Pierce rallied to regain command from Davenport on lap 18 only to lose the position on lap 34 to Marlar, who rose up from the ninth starting spot as he sought to close the WWS with back-to-back victories.

Pierce fell to third place when Larson followed Marlar past him, prompting him to wonder if he might be resigned to missing out on the biggest payday of the miniseries. But he kept plugging away and ultimately slid past Larson for second on lap 41 and sailed around the outside of Marlar off turn four to move in front on lap 43.

“When that caution came out (on lap 28) and I got passed (shortly thereafter), I was kind of a sitting duck at the moment,” Pierce said. “I thought I had (turns) one and two down but I didn’t know where to go in three and four. It made it really tricky. Tonight was a completely different track than we’ve had any night. Like, it’s changed around (each night), but tonight was way different.

“But then again, I thought, the tires I was on, I was like, ‘Just see if you can stay with ‘em,’ and if I can stay with ‘em, I’d have a shot. So they caught some lapped cars, Mikey got caught up in there, and …”

Pierce seized the opportunity to overtake Marlar, pushing his Longhorn Race Car — a machine he debuted in Jan. 7’s WWS opener — into the lead. He had to survive a relentless barrage of sliders from Larson over the remaining circuits, including a deciding exchange on lap 47 in which Pierce crossed over to Larson’s inside off turn four to stay ahead in what Pierce felt was a Race of the Year candidate.

“This place has become a very, very good racetrack,” he added, praising the 3/8-mile Vado oval. “When I first came here (two years ago) we didn’t know what it was gonna be like. I like the shape and everything, but they had to work out a couple bugs, and once they got a hang of things they’ve really done a good job.”

The 30-year-old Larson was disappointed to fall short of victory once again — his six WWS starts in the K&L Rumley Enterprises Longhorn car included three runner-up finishes and no run worse than sixth — but still bubbled with enthusiasm.

“That was the most fun Late Model race I’ve ever been a part of,” said Larson, who has been driving the iconic Rumley No. 6 in selected Dirt Late Model events since the summer of 2020. “There was more lead changes in one race than there is all season, so that was a lot of fun. Literally from start to finish, it was a battle between Bobby and J.D. and Marlar, and Stormy (Scott) was there (too).

“The lanes changed quite a bit. I was pretty committed to the top most of the time, but the bottom was good in one and two and it kind of would dirty up the top of the exit of two. Like when Marlar got the lead, I could stay with him and then it started getting too dirty up. I moved down for I think a lap and Bobby was right there … so a lot of fun racing him. I feel like we both have very similar styles, and that’s kind of just throwing our nuts up on the dash and getting after it.

“What a race, what a week of racing,” he continued. “I mean, every night, except for J.D. stomping us the first night, was good. So much fun. I definitely can’t wait for next year. This was definitely more fun than I anticipated, and I’m sure with all the races that we’ve had night in, night out, the crowd is just gonna continue to get bigger.”

Marlar joked after that the race that Vado’s owner, Royal Jones, cost him a victory in the finale.

“I’m mad at Royal here,” Marlar said, smiling toward Jones during the post-race ceremonies. “He made this racetrack so racy … a lot of tracks, I would’ve probably won the race.

“It was a lot of fun,” he continued. “It was awesome racing there with Bobby and Kyle and Jonathan, everybody that was in that deal. It was a lot going on. I was racing with Bobby and I was literally hitting the brakes for him on the back straightaway, so when I passed him I was like, ‘I’m pretty good here, right?’ Then he passed me back.”

Davenport, meanwhile, wasn’t a factor during the race’s second half, leaving him to be satisfied with the WWS points title.

“We just over-adjusted really,” Davenport said. “We was too tight from the get-go, and then we bicycled pretty hard there on the cushion (on lap 25) and I don’t know if I bent anything or not but it just wasn’t the same after that.”

The feature was slowed by just a single caution flag, on lap 28 when Johnny Scott of Las Cruces, N.M., slowed while running 10th due to a flat right-rear tire.

The initial start of the race was delayed several circuits because Late Model rookie Dillon McCowan of Urbana, Mo., who was scheduled to start sixth, lost a wheel during the parade laps. His car was towed to the infield and his crew bolted on a replacement, allowing him to start at the rear of the field and finish 17th.

In Shocker Hitch X-Mod competition presented by Barnett Harley-Davidson, Kris Jackson charged to the lead on the third lap, and once again dominated the remainder of the 25-lap feature event. He won his fourth feature event of the 2023 miniseries by a whopping 6.502 seconds over Jimmy Ray with Gabe Hodges, Nate Reinke, and Preston Carr completing the Top-5 finishes.

On the heel of his four wins he claimed the Arizona Differential Four-Or-More Challenge Bonus, which was worth $2,500. Additionally, via added money to the purse from Aeroseal, Jackson received $3,000 in lieu of the originally scheduled $1,000 top prize. Last but not least the Lebanon, Missouri claimed the X-Mod miniseries championship.

The Mesilla Valley Transportation / Border Tire Modifieds presented by Ranch Milagro main event found Tyler Wolff wiring the field from the outside-front-row starting spot. While he led all 25 laps Wolff had to survive a late-race charge from Dan Ebert to claim the $2,000 victory by 0.055 seconds. Following the lead duo across the line was Tanner Mullens, Darron Fuqua, and Dereck Ramirez.

Via his fifth-place finish Ramirez clinched the Modified miniseries championship.

With the 17th annual Rio Grande Waste Services Wild West Shootout presented by O’Reilly Auto Parts in the books, plans are already full speed ahead for next year’s mega miniseries edition, which will be held on Jan. 6-14, 2024 at FK Rod Ends Vado Speedway Park.

Open practice sessions are set for Jan. 5 and 9.

Full event details will be released in the coming weeks at www.WildWestShootout.net .