Hercules, the Son of Zeus

‘The Kneeler’ becomes the healer 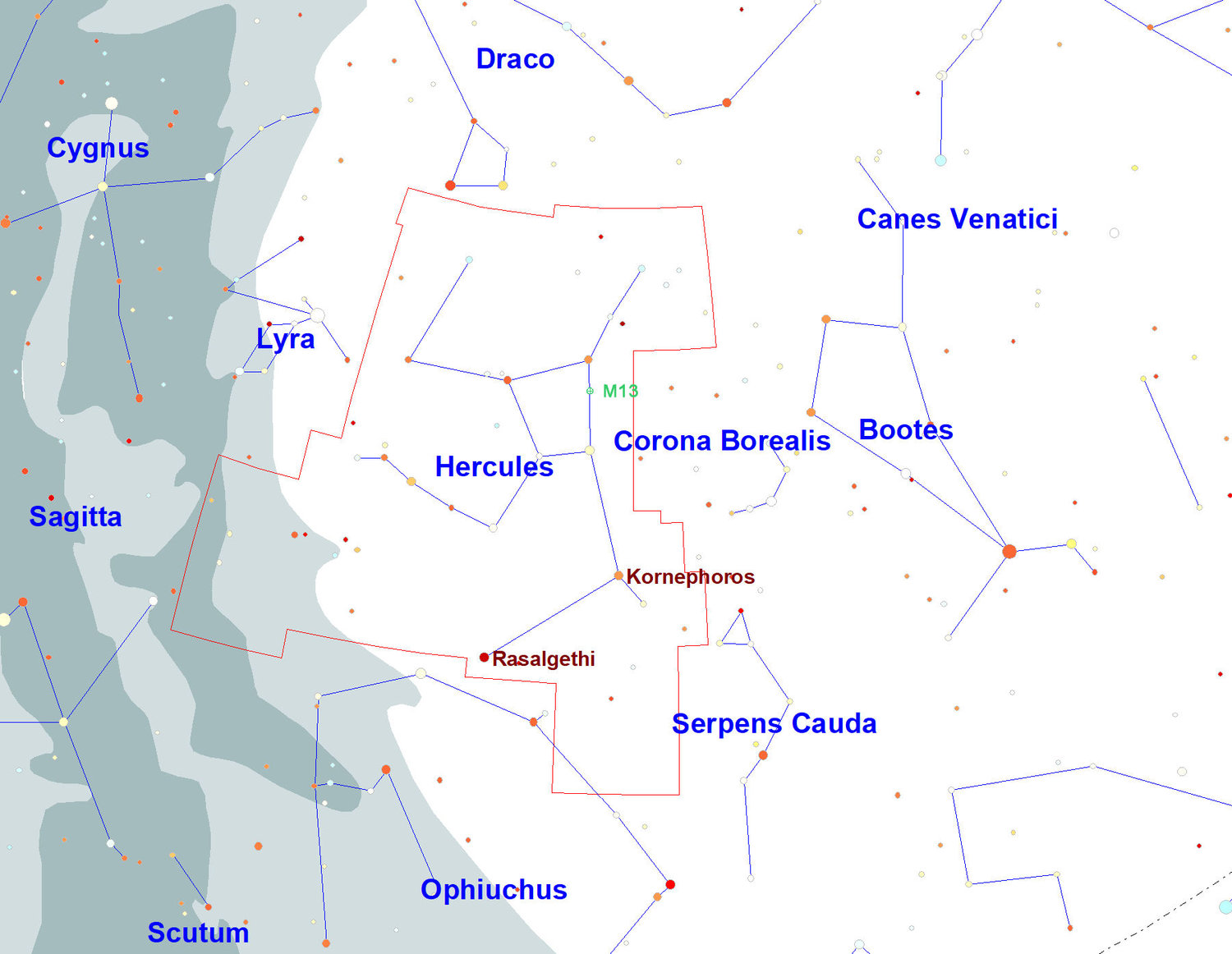 Passing nearly overhead, the constellation Hercules is the fifth largest constellation in the sky. The trapezoid in the center of Hercules is called the Keystone. Just a little north of the center of the west side of the Keystone is the great globular cluster M13. This cluster is visible to the naked eye in a dark site and it is readily visible in binoculars. It appears as a large fuzzy circle about two-thirds the diameter of the Moon.
Posted Wednesday, August 4, 2021 11:50 am
Calendar of Events – August 2021 (MDT)

A little east of overhead is a star of television and movies. He has been in the sky since ancient times, with this constellation appearing in Claudius Ptolemy’s astronomical treatise, the Almagest. Ptolemy lived in the Egyptian city of Alexandria in the second century when it was under Roman control. He was either a Greek or an Egyptian strongly influenced by Greek culture. This Greek influence would have had this constellation named Heracles, but the Roman dominance gave it the name Hercules.

This constellation was originally named “The Kneeler,” a ghostly figure on bended knee with both hands stretched to heaven. The myth has Hercules fighting the two giants, Albion and Bergion, in northwestern Italy. They were powerful opponents that he eventually defeated. He then knelt down to thank his father Zeus for the victory, which invoked the image of the Kneeler.

The myth of Hercules is rather long. While Zeus was his father, his mother was Alcmene, the granddaughter of the hero Perseus. When Zeus’s wife found out Zeus was not faithful, she did everything she could to punish Hercules. At one point, she rendered him insane and he killed his beloved wife and children. After he regained his senses, he begged the god Apollo, another of Zeus’s sons, to punish him for his deed.

While Apollo knew it was not Hercules’ fault, he still had Hercules complete Twelve Labours. They were all very difficult and each a story in its own right. He completed them, sometimes alone and sometimes with help. Apollo had promised to absolve him of guilt and make him immortal when he was done. Hercules had many other adventures and when he finally died, the goddess Athena carried him up to Mount Olympus in her chariot where he remained for eternity. This constellation symbolizes his immortality, almost overhead in the August sky.

Hercules is the fifth largest constellation and the largest with no star brighter than magnitude +2.5. Its brightest star is Rasalgethi (Alpha Herculis), a +3.1-magnitude star about 360 light-years away. Rasalgethi means “Head of the Kneeler”, harkening back to the older constellation name. While it appears as a single star to the naked eye, it is actually composed of three stars. The brightest is magnitude +3.4 with a spectral class of M5. This red star is reaching the end of its life, a red giant that pulses on regular basis, changing its brightness slightly.

Rasalgethi’s secondary star is actually composed of two stars, orbiting so closely that they cannot be separated in a telescope. The combined brightness is magnitude +5.3, with the two stars have spectral classes of G8 (yellow) and A9 (white). These two stars take around 3,000 years to orbit the primary star. In addition, there are two fainter stars that are much further away that combine with the Rasalgethi’s primary and secondary to form an optical multiple star system, one where the four stars, two of which are not gravitationally-bound to the system. They just happen to appear close together in our line of sight.

There are many deep sky objects in Hercules, but the most famous and the brightest is the Great Hercules Globular Cluster, more commonly known as Messier 13 (M13). This globular cluster is two-thirds the size of the moon and it is bright enough to be seen with the naked eye in a dark location away from the city.

M13 was discovered in 1714 by English astronomer Edmond Halley, for whom Halley’s Comet is named. Charles Messier added M13 to his catalog on June 1, 1764 as object number 13. By 1779, what looked like a fuzzy circle started to be resolved into individual stars as telescopes got bigger. A four-inch diameter telescope will bring the outer stars into focus. Larger telescopes will allow the stars nearer the core to be resolved. This object is a favorite of amateur astronomers.

M13 is orbiting our galaxy, but it is not in the disc of our galaxy. M13 orbits above and below the disc, passing through it twice each orbit. It is currently around 25,000 light-years away, south of the disc.

A globular cluster is a sphere of stars that becomes very tightly packed at its center. Globular clusters are old, having formed during the early formation of our galaxy. M13 is around 11 billion years old. This is a beautiful object that is worth a look if you ever have the opportunity to see it through a telescope.

The Planets for August 2021

Mercury passes the far side of the sun on Aug. 1, swinging into the evening sky. It will be visible in the last half of the month, passing Mars on the 18th. This will be a poor apparition for northern hemisphere observers since Mercury will slide along only slightly above the horizon. It travels from eastern Cancer, through Leo and into western Virgo. On the last day of the month, Mercury will shine at magnitude +0.0 with disc that is 5.9 seconds-of-arc across and 74  percent illuminated. It is almost 6 degrees above the western horizon as it gets dark and sets by 8:30 p.m.

This is the last month Mars will be visible in the evening sky this year. At midmonth, it is just 4 degrees above the western horizon as it gets dark, setting around 8:45 p.m. Its disc is a tiny 3.6 seconds-of-arc across and it continues to fade at magnitude +1.8. The God of War moves from central to southeastern Leo this month.

The Goddess of Love shines brightly at magnitude -4.0, 15 degrees above the western horizon as it gets dark. It sets around 9:30 p.m. Venus’ 78 percent illuminated disc is 13.7 seconds-of-arc across. This month it travels from central Leo to central Virgo.

Saturn reaches its closest point to Earth this year on Aug. 2. It is moving slowly westward in central Capricornus, shining at magnitude +0.2. It is already 14 degrees above the southeastern horizon as it gets dark, setting around 5:30 a.m. The Rings are 41.9 seconds-of-arc across, tilted downward 18.6 degrees with the northern face showing while its disc is 18.5 seconds-of-arc across.

Jupiter also reaches its closest point to Earth this month on Aug. 19. It rises around 8:00 p.m. and it is visible the rest of the night. At midmonth, The King of the Gods’ disc is 49.0 seconds-of-arc across. At magnitude -2.9, it moves from western Aquarius to eastern Aquarius.

Aug. 12 brings the Perseid meteor shower, where glowing dust particles from the comet Swift-Tuttle streak through our sky as they vaporize in the upper atmosphere. The resulting streaks appear to come from the constellation Perseus in our northeastern sky. The moon is just before first quarter, so it will not interfere with viewing these meteors. So, enjoy these celestial fireworks "keep watching the sky"!

An amateur astronomer for more than 45 years, Bert Stevens is co-director of Desert Moon Observatory in Las Cruces.