Swimming through the November sky 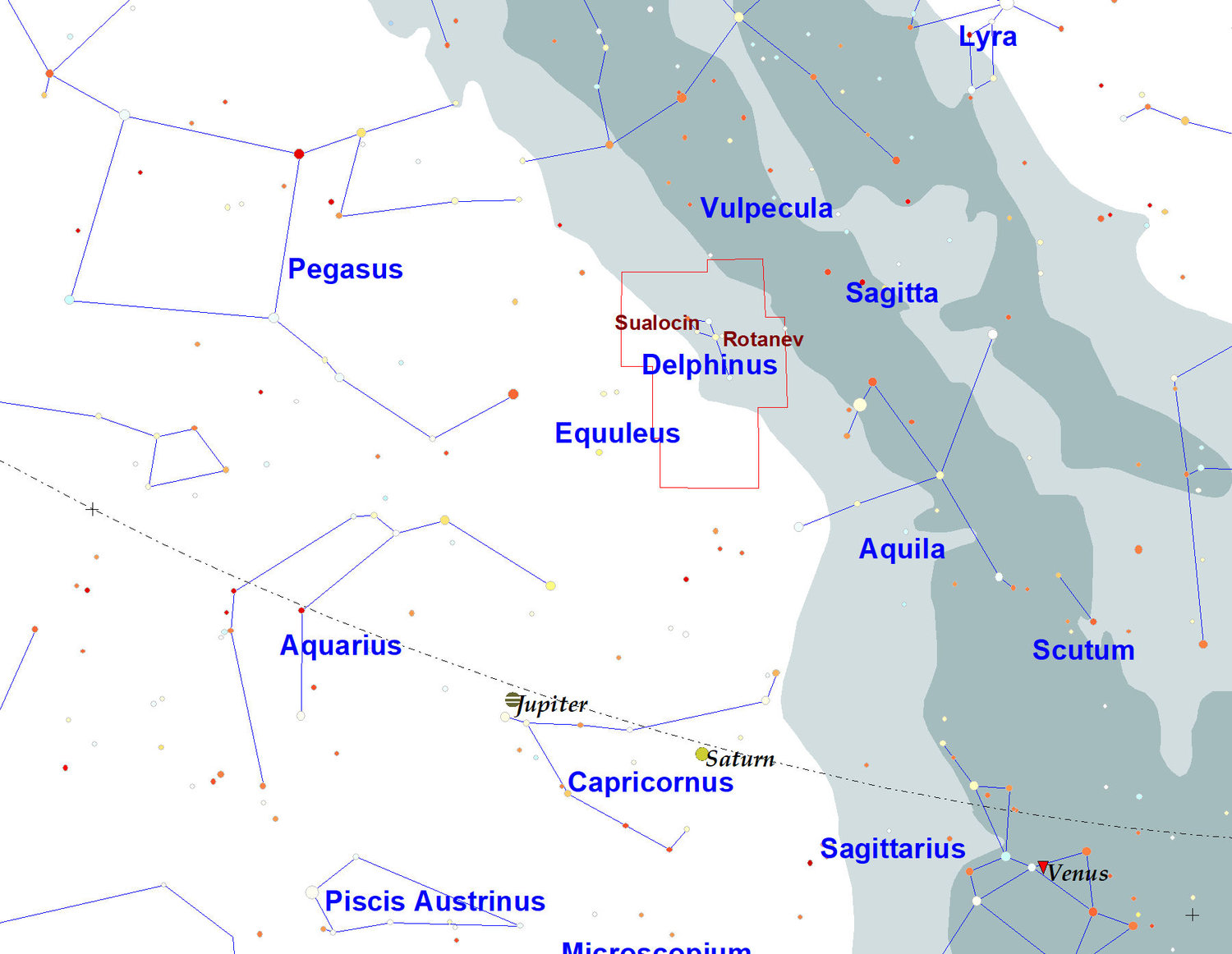 A small constellation marked by a faint diamond-shaped grouping of stars two-thirds of the way up from the southern horizon is Delphinus, The Dolphin. This constellation is composed of third and fourth magnitude stars on the eastern edge of the Milky Way. Only two stars have named in this constellation, both named in 1814.
Posted Tuesday, November 2, 2021 11:56 pm
Calendar of Events – November 2021 (MDT-MST)

Dolphins do not just swim in the sea, but one swims through our November skies as well. Delphinus, The Dolphin, is about a third of the way south of overhead. It is a small diamond of third and fourth magnitude stars marking the body of the dolphin with a fifth star off to the south-southwest marking the dolphin’s tail. Delphinus is a small constellation, 69th in area of the 88 official constellations.

In Greek mythology, the sea god Poseidon spotted a beautiful Nereid named Amphitrite dancing with her sisters on the isle of Naxos in the Aegean Sea. The Nereids were sea nymphs that were the daughters of “the Old Man of the Sea” Nereus and the Oceanid (the previous generation of sea nymphs) Doris. Poseidon was smitten with Amphitrite, but she wanted to remain a sea virgin and hid in the Atlas Mountains in central Morocco.

Poseidon asked Delphinus, the dolphin king to find Amphitrite. After many weeks of searching, he finally succeeded. Delphius’s kind and gentle nature drew Amphitrite to him, and he persuaded her that her calm and steadfast nature would balance Poseidon’s erratic nature and bring harmony to the seas. Amphitrite finally agreed. After the weeding, Poseidon, in gratitude, put Delphinus in the sky.

The second brightest star in Delphinus is the blue-white Sualocin (Alpha Delphini), 254 light-years away. It is an aging star that is past its prime, leaving the main sequence. This spectral class B9 star shines at magnitude +3.8. There are five smaller stars orbiting it. The brightest star in this constellation is Rotanev (Beta Delphini) at magnitude +3.6 with a spectral class of F5. This yellow-white star is also a binary star.

The names Sualocin and Rotanev first appeared in a star catalog assembled by Giuseppe Piazzi at the Palermo Observatory in Palermo, Sicily, Italy in 1814. Before that, they were unnamed. What the names meant or where they came from was a mystery for 45 years.

The British astronomer Reverend Thomas Webb discovered the explanation. Niccolò Cacciatore was Giuseppe Piazzi’s assistant at the Observatory. Translated to English, Cacciatore’s name is Nichola Hunter, which Latinized to Nicolaus Venator. Now the two names, spelled backwards are Sualocin and Rotaney. Since they have been in use for over three hundred years, both have been accepted by the International Astronomical Union as the proper names for these stars. So Niccolò Cacciatore successfully got two stars named after himself.

Over a human lifetime, the stars seem to be fixed in the sky, but they are actually moving very slowly. After many thousands of years, the constellation shapes will become distorted and will be unrecognizable to us. Even though they appear to move very slowly in our sky, the stars are moving quite rapidly through space.

Our Sun is in a circular orbit around the center of our Milky Way galaxy traveling at a speed of 137 miles per second, at 26,000 light-years away from the center. Even at this speed, it takes 230 million years to make one turn around the Milky Way, during which time it covers a distance of one million million million (one quintrillion) miles. Space is really big.

The other stars near us have their own motion. We can measure that motion in two components. First is the speed toward or away from us, called the radial velocity. This can be found by measuring the Doppler shift in the star’s spectrum. The other is the motion perpendicular to the radial motion, called the proper motion. This is the motion of the star in our sky.

One example is the magnitude +4.9-star Rho Aquilae. This star is only 150 light-years away from us and has a high proper motion in our sky, moving 80 seconds-of-arc every thousand years. This star was in the constellation of Aquila, The Eagle when constellation boundaries were laid out. Rho Aquilae’s motion brought it into Delphinus in 1992.

The Planets for November 2021

Venus continues to be the first star to appear in our evening sky, 21 degrees above the southwestern horizon as it gets dark. Shining at magnitude -4.6, it moves from far western Sagittarius to the eastern end of that constellation. The Goddess of Love’s disc is a 31.0 seconds-of-arc across, 40 percent illuminated crescent, setting around 8 p.m.

The Ringed Planet is 38 degrees above the south-southwestern horizon as it gets dark. It shines at magnitude +0.7, setting around 10:15 p.m. Saturn is moving slowly eastward in western Capricornus, with a disc that is 16.3 seconds-of-arc across. The northern face of the Rings is showing at a tilt of 19.0 degrees and they are 37.0 seconds-of-arc across at midmonth.

Jupiter is east of Saturn, glowing at magnitude -2.4 as it moves slowly eastward in eastern Capricornus. It starts the night 42 degrees above the south-southeastern horizon, setting around 11:30 p.m. The King of the Gods’ disc is 40.1 seconds-of-arc across.

After a few months near the Sun, Mars reappears in the morning sky this month. At the beginning of the month, it is on the east-southeast horizon as it gets dark. By the end of the month, it is nine degrees above the horizon after having risen at 5:30 a.m. Moving from eastern Virgo to central Libra this month, the God of War glows at magnitude +1.6 with a disc that is a tiny 3.8 seconds-of-arc across.

The Messenger of the Gods completes its appearance in the morning sky, visible for only the first third of the month before sinking into the solar glare. On the first of the month, Mercury is nine degrees above the east-southeastern horizon as it gets light with an 80 percent illuminated disc that is 5.8 seconds-of-arc across. It shines at magnitude -0.8. During the month, Mercury moves from central Virgo, through Libra, the northern panhandle of Scorpius and into southwestern Ophiuchus,

The Moon will pass through the Earth’s shadow on the night of Nov. 18 in a partial lunar eclipse. The Moon goes deeply into the shadow, but at maximum eclipse, a thin strip on its southern edge will still be receiving some direct sunlight, so it is not a total eclipse. The Moon enters the penumbra where some of the sunlight is blocked by the Earth at 11:02 p.m., but the shading will not be obvious for at least a half hour. The Moon enters the umbra where the Sun is completely blocked at 12:18 a.m. on November 19. Greatest eclipse is at 2:03 a.m. The entire Moon is back into at least partial sunlight at 3:47 a.m., reaching full sunlight at 5:03 a.m. Enjoy the lunar eclipse and "keep watching the sky"!

An amateur astronomer for more than 45 years, Bert Stevens is co-director of Desert Moon Observatory in Las Cruces.