Checking up on our neighbors to the south 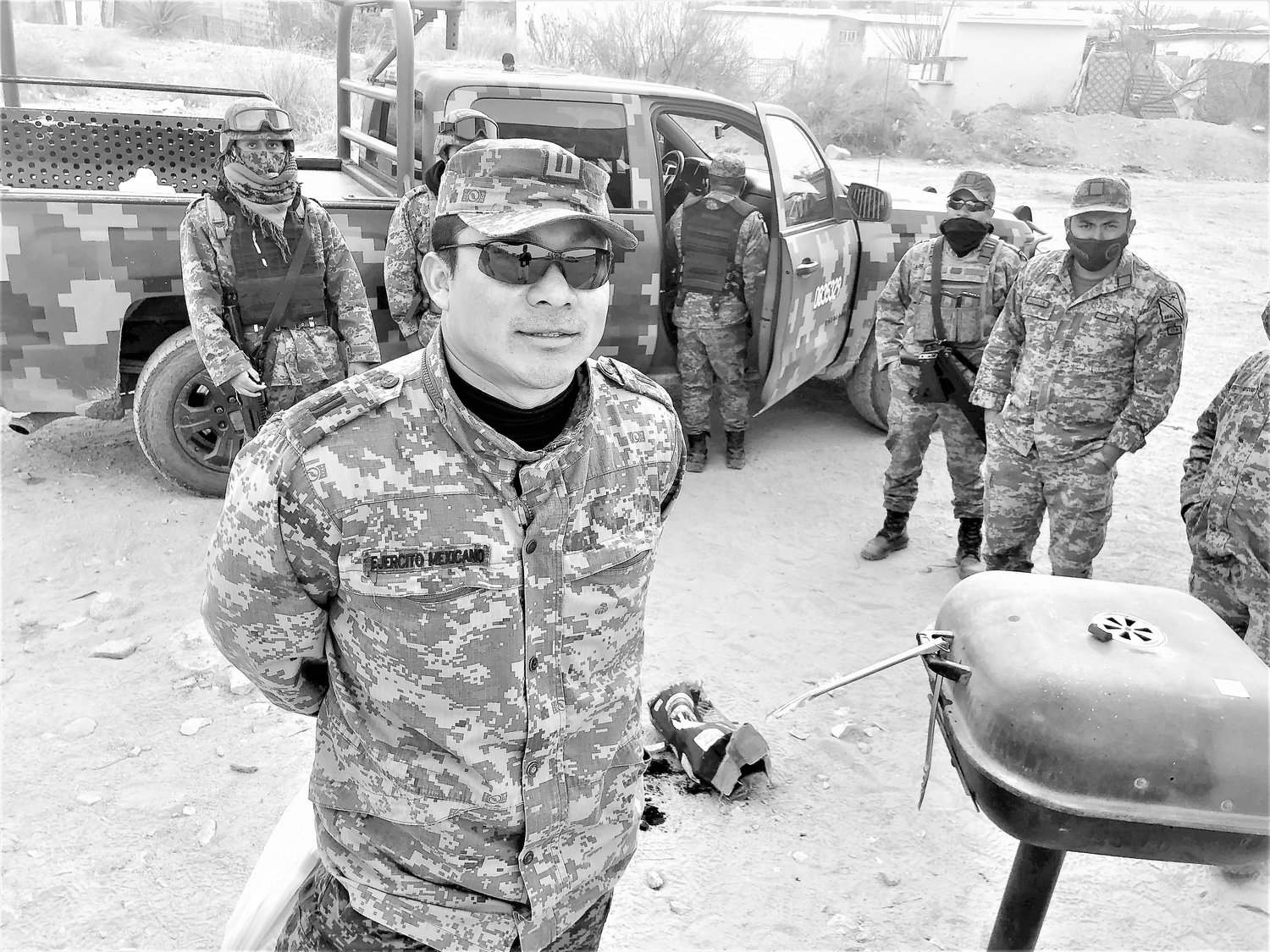 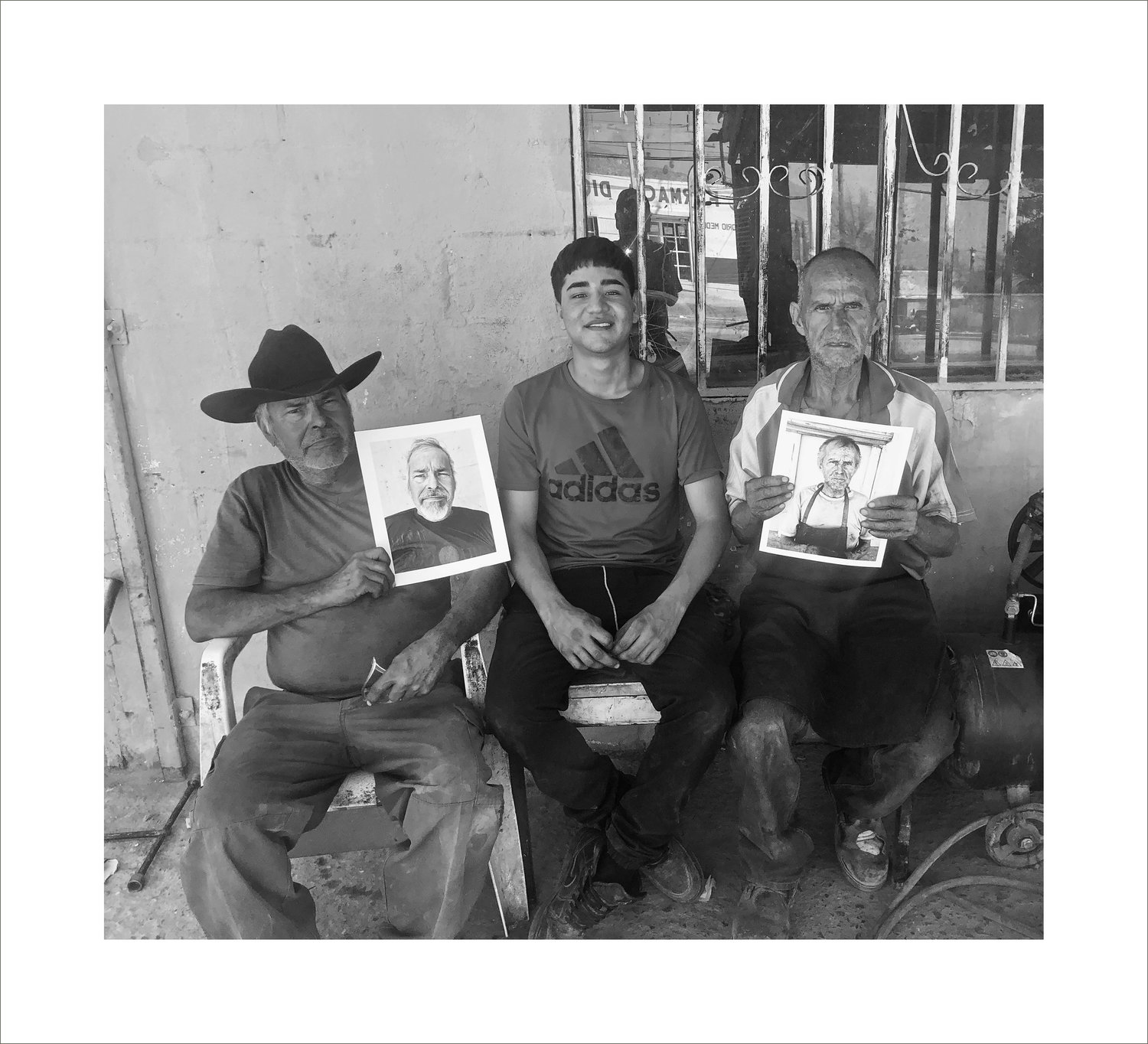 3.Francisco and Fernando with their photos, Fernando’s nephew in the middle.
Photo by Morgan Smith 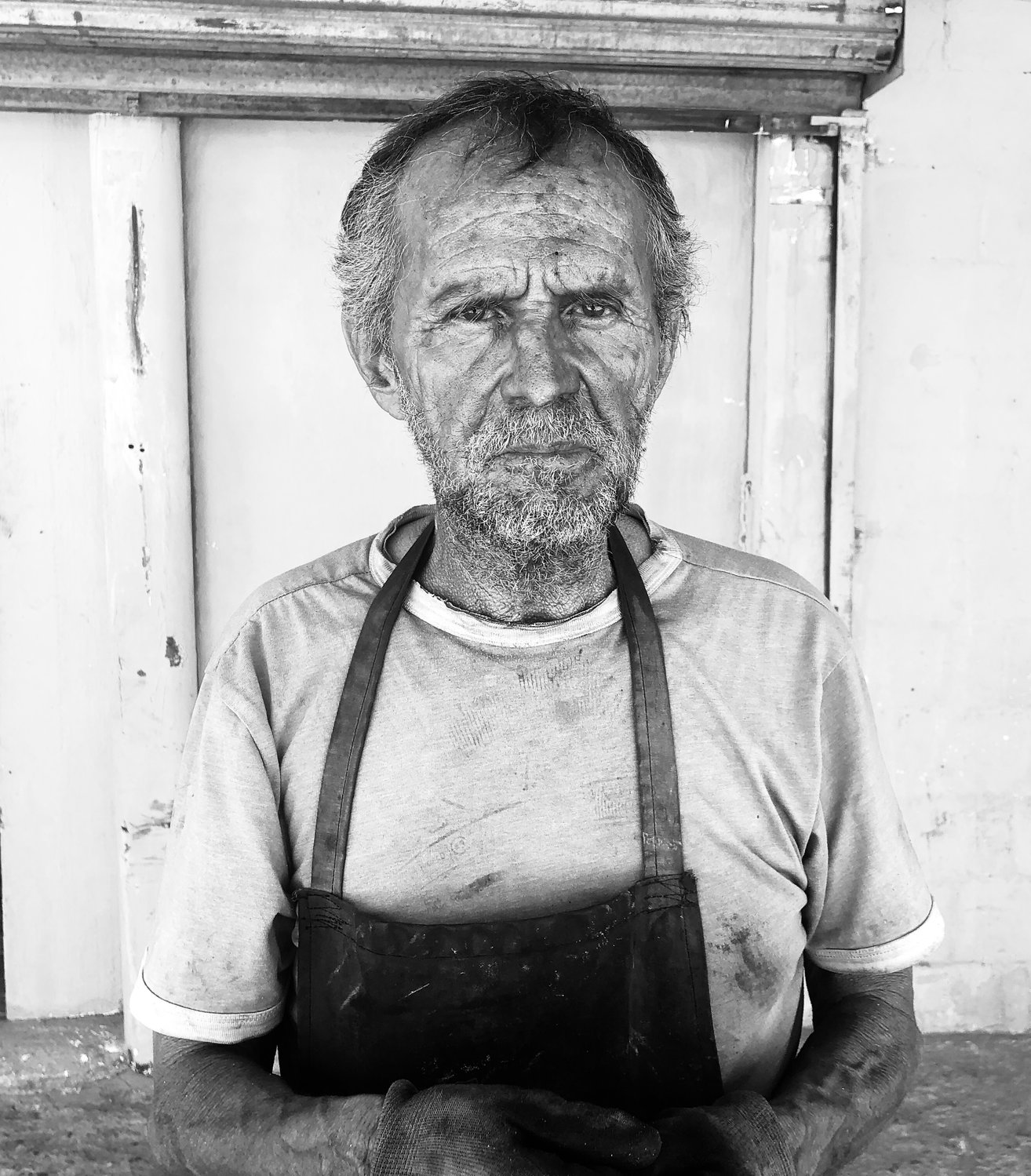 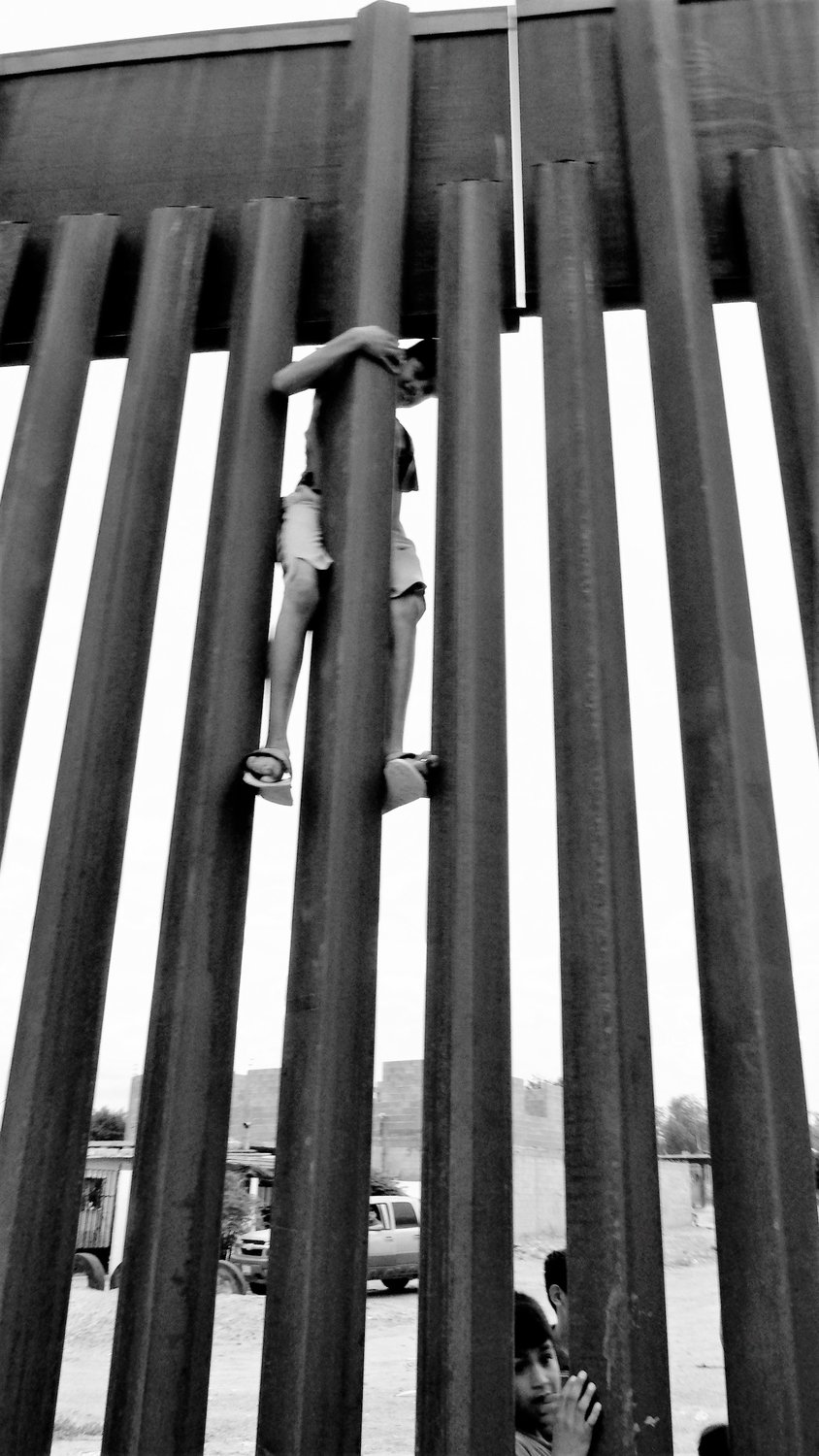 1.Victor climbing the wall between Anapra and Sunland Park for an extra dollar.
Photo by Morgan Smith 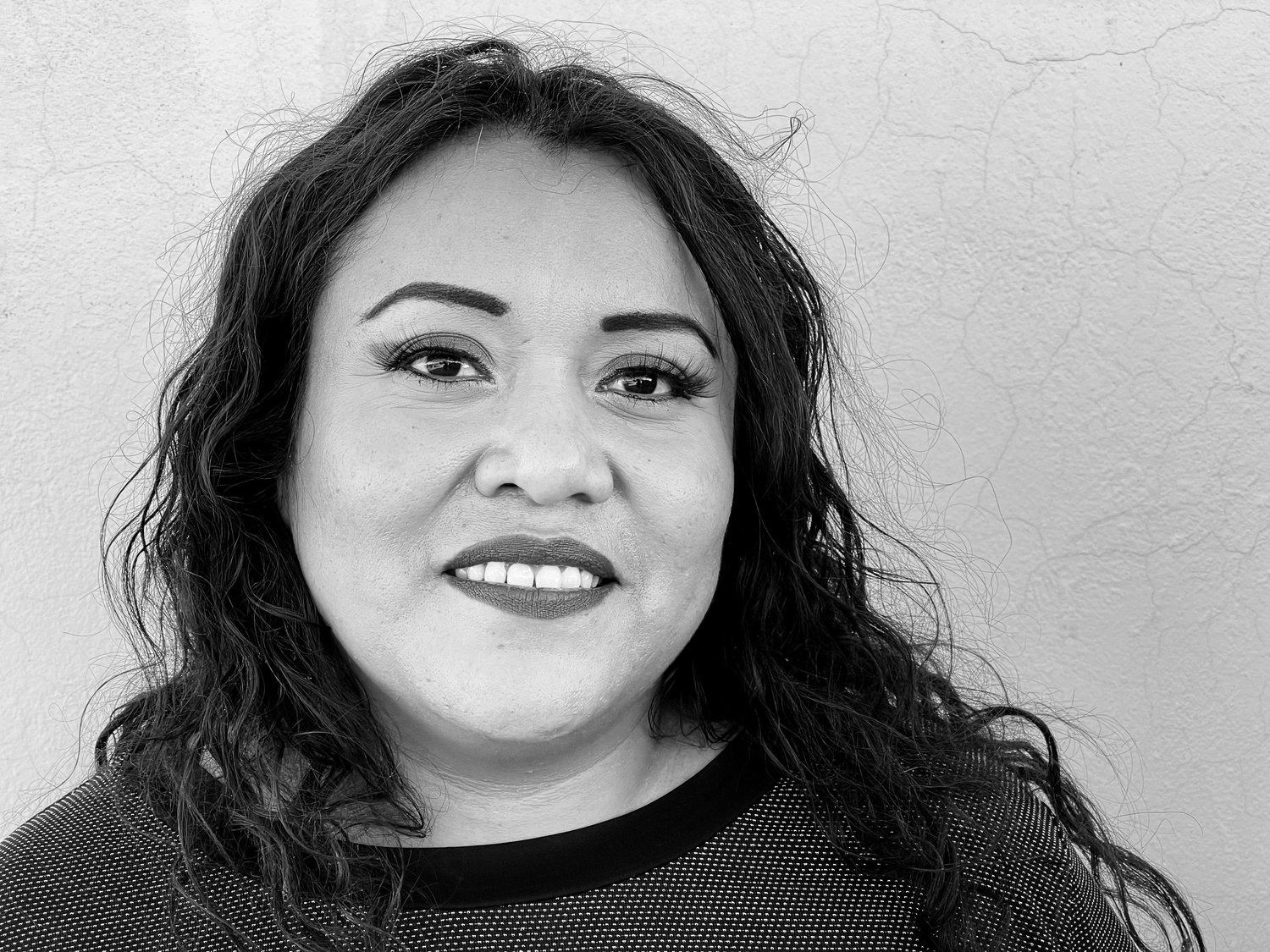 Morgan Smith has been writing about border issues for many years. He can be reached at Morgan-smith@comcast.net.

Our border tour actually begins in Hatch as we work our way to Pepe’s Cantina on the west edge of town where we meet Pedro, a migrant from Guatemala. When I first met him in March, he was in the Tesoro de Oro shelter in Palomas with broken bones in his feet from having fallen off the border wall and it looked like he would be sent back to Guatemala as soon as he could walk. A very grim situation. Thanks, however, to volunteers from Palomas and Deming, especially Sandra Magallanes, he has been able to return to the US, is getting good medical treatment and is staying in Hatch under the care of Corina Barrera, her son, Thomas, and their family. This is truly a miracle for Pedro and an extraordinary testament to humanitarians like Magallanes and the Barrera family.

We then drive past Sunland Park, New Mexico to the border wall that separates it from Anapra and visit briefly with the Mexicans who live in this very impoverished area. I give them money for the right to take their photos; One boy, Victor says he’ll show me how to climb the wall for an extra dollar and up he goes.

Crossing the border at Santa Teresa in mid-afternoon, we see none of the Mixteca Indians who are usually there, trying to sell snacks and trinkets to make a living. For years, I have been giving them cash for photos as well as bags of used clothing that they can use or sell; they know my car and always come rushing over but now there is no one.

Then a detour to Anapra for a photo op at a “desponchadora” or tire repair shop along the main roadway. Fernando, the owner, has had this shop for 40 years and Francisco has always been his assistant. This is “drive-by photography,” meaning that I see someone unusual, stop, strike up a conversation and ask for permission to take photos. In this case, I’ve been returning to bring them prints which, for Fernando or Fernie, is lots of laughs. Francisco just looks puzzled. However, driving along this main roadway that leads into Juárez is also a good way to measure business activity and see how the economy is doing.

To the south on the highway from Juárez westward to Casas Grandes, we stop for a Guardia Nacional checkpoint where about 20 soldiers await us. This is part of the plan of Mexico’s President, Andrés Manual López Obrador, (better known as AMLO), to send 1,500 members of the Guardia Nacional to the Juárez area to bring down the horrendous murder rate. There were 650 murders in Juárez in the first five months of 2021 compared to only 213 in the much larger New York City in its first 6 months.

A few weeks earlier, I went through a similar checkpoint near Fernando’s desponchadora. Is this an effective strategy? Aren’t the murders taking place within the city rather than out here on the edges? Isn’t the issue the need for better police work, not soldiers who have no police training?

After a great deal of negotiating, one of the officers allows me to take pictures, then escorts me across the highway and back to my car.

We then leave oranges and apples at a school for Tarahumara Indians. The first time we did this, these kids acted like they had never seen an orange before.

Nearby Vision in Action is a mental asylum started some 26 years ago by a former addict named José Antonio Galván. Although, with about 120 patients, it’s the largest facility for the mentally ill in Juárez, it receives almost no government support. For the last decade, I’ve been visiting at least once a month ( until Covid), bringing food and clothing, documenting Galván’s work and raising money. We recently completed a housing unit for eight women patients who have dementia and deserved to be housed apart from the male patients and it has worked out beautifully. One patient, a slender woman named Socorro, looks 10 years younger and is much more animated and cheerful than she had been before.

Viridiana “Viri” Torres, who is in charge of the facility in the absence of Pastor Galván, is technically a patient and has struggled with mental issues her whole life but, as Galván discovered soon after she was brought to Vision in Action six years ago, she is not only skilled with numbers and adept at keeping the financial records but she had innate leadership qualities and a sense of the needs of the program, in particular the needs of the women. We have raised money for another women’s unit – 20 patients this time – and Viri gives us a tour and a progress report. I never imagined that I would be involved in managing a construction project in Juárez, Mexico but that’s life.

From Juárez, it’s a long drive down the narrow highway to El Entronque and then north to Palomas where we cross the border and then Deming where we spend the night.

The next morning, we walk across the border at Palomas for the highlight of our tour which is a visit with Border Partners, a non-profit that was organized in November 2008 and that plays a dominant role in Palomas and the surrounding area with a huge array of programs including:

We meet Juan Rascón, their Palomas representative, and Melissa Reyes, the general manager, as they and their staff are loading three trucks for a delivery of food to three tiny towns to the south, El Modelo, El Entronque and Victoria. Twice a month, they make this trip, bringing 100 containers loaded with basics like potatoes, beans, noodles, eggs, flour, instant milk, toilet paper, cans of barley for soup, hand wipes. This time they also have school supplies and T-shirts for the kids.

Our truck goes to El Entronque where a line of recipients has formed, all wearing masks.  It’s an emotional moment as Border Partners fills in for a government that is absent. By early afternoon, we’re headed back to Santa Fe, deeply moved, as always, by the opportunity to visit with the volunteers who are helping Pedro in Hatch recover from his fall,  the Tarahumara school, Pastor Galván and Viri at Vision in Action, plus Melissa and Juan and their leadership at Border Partners. They may not make the headlines but they do make an enormous difference in the lives of those who live along the border.